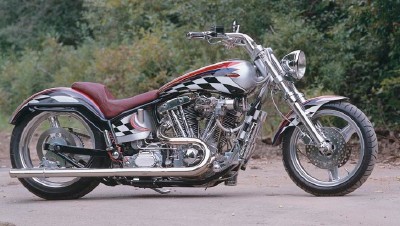 Bud Dennis of Crown Custom Cycle Fabrications has a long-standing reputation for building high-performance Harley-Davidsons for the dragstrip. So it seems only natural he would eventually put his extraordinary knowledge to work on a street machine like Checkers.

Though a Harley Softail model was the starting point, most major components have been replaced with more performance-oriented hardware. That includes the frame, purchased from Bourget Bike Works, needed to house the enlarged engine. Progressive supplied the rear suspension, but the original forks-shortened by two inches-hold up the front.

The heart of the beast is a hand-built 140-cubic-inch monster V-twin fed by twin S&S carburetors. And as if that weren't enough, there's also a nitrous oxide system onboard for added punch. Assigned to rein in all that power are dual Harley disc brakes in front and a single Performance Machine anchor in back.

Though "go" is certainly the name of the game here, "show" has not been ignored. An elaborate, brightly colored paint scheme combines with plenty of polished parts to turn heads as the bike goes by-most likely, very quickly.

Go to the next page for more photos and details of this high-performing chopper, Checkers. 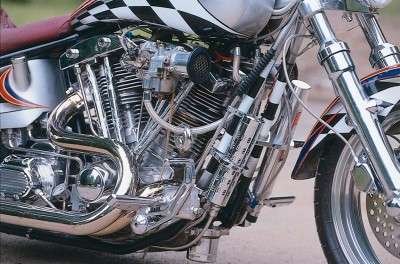 Twin carbs -- one on each side of Checkers -- feed the hungry 140-cubic-inch V-twin, which eats nitrous for dessert.

With a history of Harley-Davidson choppers, the builder entered new territory by crafting the street machine known as Checkers. Below are more pictures and details of this exquisite chopper.

Note the injectors in Checkers' left-side manifold just ahead of the cylinder.
Checkers' colorful paint scheme adds show to the go.
Considering the power available for Checkers, the Kosman rear wheel holds what seems to be a rather modest tire -- with a very short life expectancy.

10 Notorious Motorcycle Gangs
Behind the Scenes at Supercross
Can Popping a Wheelie Land You in Jail?