The Team and the Race 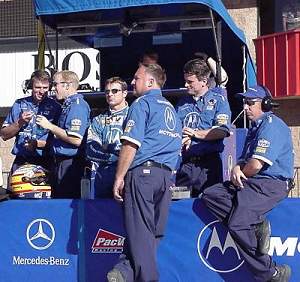 The team and Mark (third from left) before the race

The PacWest Racing Group has been a CART competitor since Bruce R. McCaw formed the team in 1993. The group had its most successful CART campaign to date in 1997 when Mark Blundell and his teammate combined for four race wins, three pole positions and finished sixth and fourth, respectively, in the Championship. Mark also won the closest race in CART history -- by only 27 thousandths of a second -- at Portland.

McCaw had an illustrious business career prior to forming the PacWest Racing Group. He founded an aviation insurance company, a regional airline and, with his brothers, a cellular phone company that AT&T purchased and now operates as AT&T Wireless.

The PacWest Racing Group consists of 72 people who are based in Indianapolis, IN (you can take a shop tour). The team is a complete business, so it includes a wide range of people: vice presidents, directors, managers, engineers, technicians, mechanics, and so on, both on the racing and the business/marketing sides. The PacWest Racing Group is responsible for everything from the aerodynamics of the car to what the team's guests will eat on race day!

The part of the team that you see on race day is the group of specially trained people who work in the garage and the pits. They are intimately familiar with the car and work closely with the driver in their attempt to create a winning combination.

For the team, the season starts in November with the arrival and assembly of the chassis and engines for the new season. The team starts testing in January and February. Racing starts in March and runs on roughly a bi-weekly schedule through late October. Although most Champ Car races take place in the United States, several of the races are international (Australia, Canada, Japan, and Brazil).

All of the work, training and preparation lead up to one thing: race day! On the day of the race, the team hopes that everything with the car and the driver is perfect and that the result of all of this preparation is a win.

Races normally occur on Sunday, and there are 20 races in a season occurring approximately every two weeks (see the the CART page for a complete calendar).

The team typically arrives at the track on Wednesday evening or Thursday morning. To get to a race, the team packs up the cars and a complete mobile shop into tractor trailers and drives (or flies, in the case of international races) to the event:

The rig holds two cars, spare engines, various parts and tools and all of the equipment necessary to repair any problem that might occur.

The team unpacks everything into the garage at the track, and the mechanics get to work preparing the car on Thursday. On Thursday evening, there is a technical inspection of the car, checking the weight, measurements, safety features and so on. On Friday, there are practice sessions in the morning and afternoon, as well as provisional qualifying if the race is being held on a road course. Saturday is reserved for practice in the morning and qualifying in the afternoon. The actual race occurs on Sunday.

A big part of the race is the pit stops. Each team is assigned a slot on pit row, as shown below:

What the driver sees as he pulls into the pits
What the driver sees in his rearview mirror as he pulls out of the pits
The team's side of the pit wall
The team's fuel and compressed nitrogen for use during the race
The team working on the car just before the race
During the race, the Motorola PacWest team waits for driver Mark Blundell to pull into the pit.
Watch the team replace all four tires, add 35 gallons of methanol to the fuel cell and make any needed chassis adjustments during this 12-second pit stop!
Practicing before the race, the Motorola car leaves the pits.

A pit stop is a choreographed, high-speed event designed to service the car as quickly as possible. During a typical stop, the team will load 35 gallons of methanol into the car, replace all four tires and adjust the angle of the front wing. The team trains for months, both with the car and in the weight room, to get ready for this level of performance.

Motorola is an interesting company to use as an example because Motorola's role in Champ Car racing has four distinct parts:

Motorola is the "Official Communications Hardware of CART." Motorola wireless communications equipment helps keep safety workers, medical personnel, teams, drivers and the CART operations staff in constant communication. The fast-paced, high-technology environment of Champ Car racing is a perfect proving ground for Motorola products. It is interesting to note that the wireless equipment used by CART, the teams and the support staff is the same wireless equipment that consumers purchase worldwide for individual use.

Working with organizations such as Racing Radios, Motorola helps provide communications to most of the Champ Car teams along with the Pace Car Program and individual tracks. Racing Radios experience combined with Motorola products forms the backbone of the communication infrastructure on the track -- there literally could not be a race without it.

Sponsors are vital to all major forms of automobile racing. The sponsors provide the capital that supports the teams and allows them to race. Without the sponsors there would be no teams, and therefore no racing.

Sponsoring a Champ Car is not an inexpensive proposition. There are many different levels of sponsorship and the teams work in different quality brackets. At the low end, a sponsor can form a syndicate and pay on the order of $250,000 or $500,000 to be one of the sponsors of a multi-sponsor car. At the high end, an exclusive sponsorship can exceed $10 million per year. In return, the sponsor's goal is to get exposure for the company's name. The car, the banners on pit row and other types of signs let millions of TV viewers and fans at the track see the sponsor as a part of Champ Car racing.

Beyond the exposure that motorsports provides for Motorola, they use their program to develop business relations with customers and consumers, and to develop business-to-business opportunities and partnerships. Motorola also uses motorsports to increase brand awareness to an extremely large global audience that has proven to be brand loyal to sponsors supporting motorsports as a whole. Additionally, with CART being a global series, Motorola has the ability to participate with all of their global customers, business units and sectors to develop programs and promotions worldwide.

Sponsorship of a Champ Car works well for Motorola. The exposure the company gets is associated with a high-tech, exciting sport that makes extensive use of two of Motorola's major products -- radios and microprocessors.

The company feels that it gets a very good return on its investment.

For more information on Champ Cars and related topics, check out the links below.