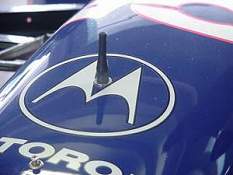 One of the hidden aspects of Champ Car racing is the radio system used both in the car and all around the race course. At a typical race there are several thousand one-way and two-way radios sharing the airwaves! They transmit data from the car and the driver, allow the teams to communicate with one another and even let the tires transmit their pressure to the onboard data computer! A typical car has as many as eight radios in operation at any one time:

A car sprouts antennas to handle all of this wireless communication:

At CART events, Racing Radios supplies the radios that CART officials, series marketing and management staff, medical staff, safety workers and support staff use. They use Motorola equipment exclusively, and it is set up in an amazing variety of systems. The teams are responsible for their own equipment, and many enlist the help of Racing Radios for purchasing equipment, service and accessories. Here's a typical example:

Each team will have this arrangement for everyone in the pit area and the driver. Teams will normally also reserve a frequency for the team's hospitality group (which provides food and such to team members and the team's guests) as well as to the team's marketing group. A typical team will have 50 to 75 radios.

On separate radio frequencies there are other groups as well. For example, CART officials use approximately 250 radios. Race control uses radios, as do the people who are working for the track. Medical crews, fire safety crews, wreck cleanup crews, etc. are all using radios. This is why, at any race, there can be upwards of 3,000 Motorola radios consuming hundreds of allocated frequency bands. Racing Radios coordinates all of the frequencies so that all of the teams have a clear channel during the race, and also handles all of the licensing with the FCC (Federal Communications Commission) for each event.

In addition to all of this voice communication, the car is also transmitting telemetry data back to the team and to CART (for example, to supply data to the telemetry board). Each tire on every car also has its own small, 0.25-watt radio to transmit pressure data to the car's onboard data logging system. The tires and the cars transmit in the 900-MHz band, with the car using spread spectrum techniques to improve reliability and reduce problems with interference.

Also, some cars now have an in-car television camera (sometimes more than one) that transmits real-time images back to the television network for broadcast to viewers so they can see the driver's perspective.

With all of these radios transmitting, the big problem is finding a set of clear frequencies that keep everyone separated and are also free from outside interference. This problem gets even worse when the race course is near a city, where the frequencies are already crowded with city services like police, fire and sanitation, as well as industrial radio users. Racing Radios is in charge of finding clear frequencies for everyone prior to the race and then assigning the frequencies to each team. Racing Radios also needs to keep all of the radios charged, so there is a tractor-trailer devoted to charging equipment and distributing all of the radios.

Radios are kept in a tractor-trailer where they can be recharged and distributed.
The other thing that Racing Radios provides is the ear pieces, microphones and headsets that everyone uses. Drivers typically use custom-molded or foam ear pieces and noise-canceling microphones inside their helmets.
Crew members in the pits use noise-canceling headsets, with their radios on their belts.
During practice, many of the teams use scramblers -- small modules that plug into the radio to prevent eavesdropping.

During the race, scramblers are not permitted. All communication is therefore available to anyone with a radio scanner, and many fans and reporters bring scanners to each race to get more detail on what is happening.