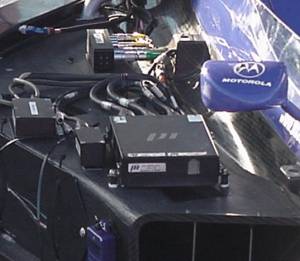 Electronics on the driver's right

A Champ Car is essentially a rolling computer. On both of the air tunnels for the radiators you will find an assortment of many different electronic subsystems.

For example, in the photo below (the driver's left) you can see:

Electronics on the driver's left

The role of the computer has grown significantly over the last 10 years. The engine is now completely controlled by computer (if this computer goes out, the engine will not run). Among other things, the ECU controls:

Each team outfits its car with a sophisticated data logging system, as well as a telemetry system able to transmit data from the car to the pits in real-time. Each team has at least one member affectionately known as the DAG -- the Data Analysis Geek -- whose specific role is to pore over the reams of data a car produces during a practice run or a race and help the team use that data to maximize the car's performance.

A typical data-logging computer is capable of measuring 200 different parameters of the car while the car is in motion. The data logging system can also transmit 72 channels of data back to the pits in real-time. All 200 parameters are also stored onboard for later downloading. The team can connect a laptop to this jack, located under the rollbar, to download the car's stored data into a laptop computer:

Some of the many signals that the logging systems record include:

The height of the vehicle is measured using lasers, which are accurate to a tenth of a millimeter. The team mounts the lasers on the car during testing (a team cannot use the lasers during an actual race). In this photo, you can see the small laser pod mounted just behind the front suspension.
At four points along the track there are infrared beacons. Each car has an infrared sensor to detect the beacons. You can see the window for the sensor just below the antenna in this photo.

Track location is measured in two ways. At four points along the track there are infrared beacons. Each car has an infrared sensor to detect the beacons. When the car passes the beacon, the car sends a signal back to the pit; this allows the team to record accurate timing splits around the track. The team can also use the car's accelerometers as an inertial navigation system to plot the position of the car around the course.