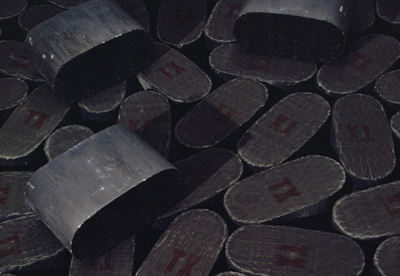 There are millions of cars on the road in the United States, and each one is a source of air pollution. Especially in large cities, the amount of pollution that all the cars produce together can create big problems.

To solve those problems, cities, states and the federal government create clean-air laws that restrict the amount of pollution that cars can produce. Over the years, automakers have made many refinements to car engines and fuel systems to keep up with these laws. One of these changes came about in 1975 with an interesting device called a catalytic converter. The job of the catalytic converter is to convert harmful pollutants into less harmful emissions before they ever leave the car's­ exhaust system.

Catalytic converters are amazingly simple devices, so it is incredible to see how big an impact they have. In this article, you will learn which pollutants are produced by an engine and how a catalytic converter deals with each of these pollutants to help reduce vehicle emissions.

Pollutants Produced by a Car Engine 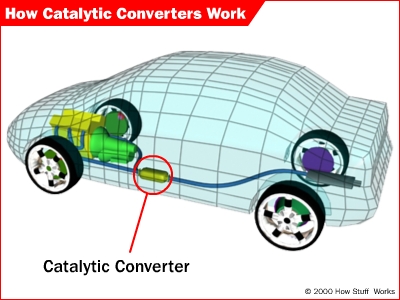 The location of a catalytic converter in a car.

In order to reduce emissions, modern car engines carefully control the amount of fuel they burn. They try to keep the air-to-fuel ratio very close to the stoichiometric point, which is the ideal ratio of air to fuel. Theoretically, at this ratio, all of the fuel will be burned using all of the oxygen in the air. For gasoline, the stoichiometric ratio is about 14.7:1, meaning that for each pound of gasoline, 14.7 pounds of air will be burned. The fuel mixture actually varies from the ideal ratio quite a bit during driving. Sometimes the mixture can be lean (an air-to-fuel ratio higher than 14.7), and other times the mixture can be rich (an air-to-fuel ratio lower than 14.7).

The main emissions of a car engine are:

These emissions are mostly benign, although carbon dioxide emissions are believed to contribute to global warming. Because the combustion process is never perfect, some smaller amounts of more harmful emissions are also produced in car engines. Catalytic converters are designed to reduce all three:

In the next section, we'll look at exactly what goes on inside the catalytic converter.

Are lawn mowers next?

Gallon for gallon, new lawn mower engines contribute 93 times more smog-forming emissions than new cars. It's no wonder that the EPA and the state regulators of California are trying hard to get golf ball-sized catalytic converters into lawn mower and other small engines. However, just like in the 1970s, the lawmakers are being met with a powerful lobby. Briggs & Stratton, the leading manufacturer of small engines, says that these regulations would make for an unsafe product that emits too much heat. Four smaller lawn mower engine manufacturers have refuted this charge. Briggs & Stratton also contends that the overheating could cause brush fires if the mowers are left running and sitting still. California democrats and the EPA think it has more to do with the bottom line. Pending regulations proposed in California could reduce emissions by the equivalent of 800,000 cars per day [source: Barringer].

In chemistry, a catalyst is a substance that causes or accelerates a chemical reaction without itself being affected. Catalysts participate in the reactions, but are neither reactants nor products of the reaction they catalyze. In the human body, enzymes are naturally occurring catalysts responsible for many essential biochemical reactions [source: Chemicool].

In the catalytic converter, there are two different types of catalyst at work, a reduction catalyst and an oxidation catalyst. Both types consist of a ceramic structure coated with a metal catalyst, usually platinum, rhodium and/or palladium. The idea is to create a structure that exposes the maximum surface area of catalyst to the exhaust stream, while also minimizing the amount of catalyst required, as the materials are extremely expensive. Some of the newest converters have even started to use gold mixed with the more traditional catalysts. Gold is cheaper than the other materials and could increase oxidation­, the chemical reaction that reduces pollutants, by up to 40 percent [source: Kanellos].

Most modern cars are equipped with three-way catalytic converters. This refers to the three regulated emissions it helps to reduce.

The oxidation catalyst is the second stage of the catalytic converter. It reduces the unburned hydrocarbons and carbon monoxide by burning (oxidizing) them over a platinum and palladium catalyst. This catalyst aids the reaction of the CO and hydrocarbons with the remaining oxygen in the exhaust gas. For example:

There are two main types of structures used in catalytic converters -- honeycomb and ceramic beads. Most cars today use a honeycomb structure.

In the next section, we'll look at the third stage of the conversion process and how you can get the most from your catalytic converter.

One simple solution to this problem is to move the catalytic converter closer to the engine. This means that hotter exhaust gases reach the converter and it heats up faster, but this may also reduce the life of the converter by exposing it to extremely high temperatures. Most carmakers position the converter under the front passenger seat, far enough from the engine to keep the temperature down to levels that will not harm it.

Catalytic converters in diesel engines do not work as well in reducing NOx. One reason is that diesel engines run cooler than standard engines, and the converters work better as they heat up. Some of the leading environmental auto experts have come up with a new system that helps to combat this. They inject a urea solution in the exhaust pipe, before it gets to the converter, to evaporate and mix with the exhaust and create a chemical reaction that will reduce NOx. Urea, also known as carbamide, is an organic compound made of carbon, nitrogen, oxygen and hydrogen. It's found in the urine of mammals and amphibians. Urea reacts with NOx to produce nitrogen and water vapor, disposing more than 90 percent of the nitrogen oxides in exhaust gases [source: Innovations Report].

­All over the country, SUVs and trucks are becoming targets for opportunists looking to cash in on the valuable precious metals used inside catalytic converters. A standard catalytic converter contains several hundred dollars worth of platinum, palladium and rhodium. The ground clearance on trucks and SUVs makes for easy access to the converters, so all a thief needs is a reciprocating saw and about 60 seconds. This trend has police on the lookout in many parts of the country where this kind of theft has been a problem. Police caution SUV and truck drivers to park in busy, well-lit areas.