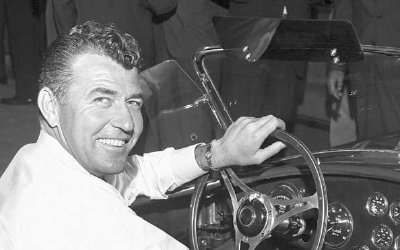 Carroll Shelby was part showman, all businessman when it came to fast cars. See more pictures of the 2006 Ford Mustang and the Ford Shelby GT-H.

By the time the 1965 Ford Mustang debuted, Carroll Shelby and his furiously fast Cobra sports cars were already performance legends. The high-performance machines Shelby would create out of the Mustang were destined to achieve fabled status of their own.

It takes a fascinating man to create captivating cars. Born in 1923 in Leesburg, Texas, Shelby served as an Army Air Corps flight instructor during World War II, then worked as a truck driver, ranch hand, and salesman. He was into chicken ranching when he turned to racing sports cars, starting in 1952 with a humble MG-TC.

To many enthusiasts, the name Carroll Shelby conjures images of a lanky country boy with a thick Texas drawl and a wide "aw shucks" grin beneath a black cowboy hat. This down-home manner was somewhat calculated. In 1953, for example, Shelby was late getting to a race and had no time to change out of his farmer's overalls. Noticing how people reacted, he made the "Texas tuxedo" a sartorial signature.

He might play to crowds, but Shelby was as smart about business as he was about racing and building cars. He was, as one writer put it, "a promoter in the most flattering sense. Like an alchemist, he had the unique ability to combine elements so that their sum becomes greater than the total of their parts."

Shelby raced successfully in the U.S., Europe and Latin America in the mid- to late-Fifties, wheeling Aston Martins, Maseratis, Ferraris, and other sports cars with stellar teammates including Masten Gregory, Dan Gurney, and Phil Hill. He also had a few Formula rides during the 1955 and '58 seasons.

A natural but fierce competitor, Shelby would often steal a quick pre-race snooze, saying "Wake me up when it's time to grid." His high point as a driver came in 1959. Shelby's friendship with John Weyer of Aston Martin led to his being paired with Ray Salvadori in an Aston DBR for that year's LeMans 24 Hours. Carroll and Ray won the always-grueling event outright.

The very next year, a heart condition forced Shelby to retire from driving, but not from working with cars. Settling in Southern California, he became a Goodyear tire distributor and opened America's first performance driving school. Meanwhile, he dreamed of building a pure "sport car" -- trim, light, powerful, and fast enough to beat anything on street or track.

He got his chance in September 1961. Ford had just introduced its revvy "Fairlane 221" small-block V-8, and Shelby heard that England's A.C. Cars was losing the engine supplier for its lithe two-seat Ace roadster.

There are various stories about what happened next, but basically Carroll decided the engine and car were made for each other. He cajoled A.C. into selling him Aces and Ford into supplying engines, only he opted for the more powerful 260-cubic-inch V-8. Thus was born the Cobra in February 1962.

By year's end, Shelby was offering an even faster 289-cid version, built at his small shop in Venice, California. By 1965 he had the brutal 427 Cobra, a timeless classic whose reputation was cemented in early 2007 when Shelby's personal version, the 800-horsepower "Super Snake," was sold at auction for $5.5 million. 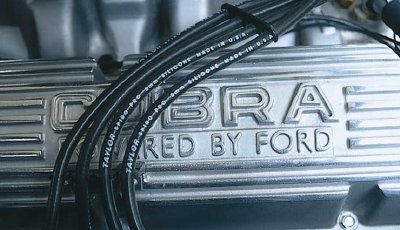 The Cobra engines Shelby used in the Mustang and elsewhere boasted that they were "powered by Ford".

Ford Division chief Lee Iacocca suspected his new creation, the 1965 Ford Mustang would be popular, but believed a true "Total Performance" aura would cinch its success. What better than a racing Mustang capable of trouncing Chevy Corvettes in big-league sports-car competition?

To build it, Iacocca sought out Carroll Shelby. The marketing-minded Iacocca was well aware that Shelby's Cobra sports car were festooned with "Powered by Ford" logos, and knew Shelby had the racing experience and mechanic talent needed to make a winner of Mustang.

Shelby's first high-performance Mustang was the 1965 GT-350. Like the Cobra, the GT-350 was all business and tough to beat, even in street tune. Racing R-models fulfilled Iaccoca's hopes by running away from Corvettes in the Sports Car Club of America's B-Production class, winning the national championship in 1965, '66, and again in '67. But then Ford and the stock Mustang began changing in ways that Shelby didn't like, and he parted company with Dearborn in 1970.

For the next 10 years, Shelby tended to various businesses, almost all of which succeeded by dint of his fame. Notable among these ventures was marketing a spicy Texas chili mix and, believe it or not, an underarm deodorant called -- what else? -- "Pit Stop."

Meanwhile, a slew of imitation Cobras had cropped up. Not surprisingly, Shelby took the counterfeiters to court, putting many out of business even though some cases ran on for years. In the early 1980s, Shelby again teamed with Lee Iaccoca, this time at Chrysler, where the former Ford exec had become chairman. There, Shelby brokered a string of coarse but potent turbocharged Dodges, then served as the "spiritual conscience" for the Cobra-like 1990 Dodge Viper.

©2007 Publications International The 1968 GT-500 came toward the end of Shelby's first stint with Ford.

Despite a subsequent heart transplant, Shelby would keep going strong. Shrewd, colorful, and feisty as ever, he set up a modern new shop in Las Vegas to build the capable, though ultimately star-crossed, Series I "new Cobra" of 1999, as well as more "continuation" Cobras assembled from new-old-stock parts and even a few "new" GT-350s converted from 1960s Mustangs.

Then, in 2003, Shelby officially returned to Ford as a consultant on high-performance models. Announcing his return was the exciting 2004 Shelby Cobra concept based partly on the midengine Ford GT supercar. And in 2005, the relationship was once again infused with Mustang magic when the Texan helped Ford unveil the 500-horsepower 2006 Shelby Cobra GT500.