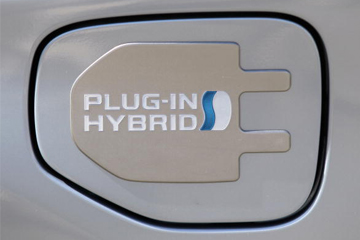 It's frustrating to run out of power, when a cell phone dies in the middle of a call or a cordless drill loses its juice halfway through a home improvement project. In most situations, the consequences aren't enough to trigger widespread fear. But as consumers are urged to consider electric cars and plug-in hybrids, many are left to wonder: What happens when the car dies before reaching its destination? This problem is known as range anxiety, and car manufacturers are trying to alleviate its effects.

True, likely candidates for electric vehicles (EVs) have probably weighed all the pros and cons. Electric cars are most efficient for drivers who can make their regular commute without needing to charge en route. Opting for a plug-in hybrid, which operates primarily on the electric engine but features a gasoline-powered backup, can provide the sense of security that will help consumers get used to the idea of staying within range. The goal of a plug-in hybrid is to avoid using the gasoline engine, but it's there for the times when a driver strays beyond range or hits an unavoidable delay. The Chevy Volt, for example, can travel on gas about 350 miles (563.3 kilometers) beyond its maximum 35-mile (56.3-kilometer) electric range.

There are two major factors in range anxiety: General unfamiliarity with EVs, and the limits of the charging infrastructure. Automakers and energy researchers are working to alleviate both issues, with the help of millions of dollars in government spending.

EVs already help drivers manage range. For years, navigation systems have located gas stations, restaurants and other services, so EVs made simple additions to this familiar system. For example, the electric Ford Focus and Nissan Leaf show charging stations available near the planned route, and will advise the driver on the likelihood of making it to a destination.

But what if these techniques aren't reassuring enough? Planning doesn't solve every problem, and though statistically, commuting on electric power is possible for most drivers, some trips are simply beyond range. The hybrid option is expected to help consumers become more comfortable with range. After all, every vehicle has range -- a conventional car can go only so far on a single tank of fuel -- but few people think of it that way. A typical car's range can be replenished anywhere there's a gas station. Until public charging stations become commonplace, many drivers might consider it too risky to buy an electric car.

Charging stations are becoming a more common sight in urban areas, but the process still has a long way to go, and there are disagreements among EV experts about EV use. Currently, there are an estimated 1,400 charging stations in the United States [source: Taub]. Public car charging station infrastructure is being treated as a necessity, with plans for increased access and convenience. However, Larry Nitz, the executive director of hybrid and electric powertrains for General Motors, has said that public charging stations are excessive, since most people will charge at home and at work. This carries the implication that EVs are designed primarily for commuting. Even if the statement was intended to ease public fear by suggesting electric cars are less inconvenient than most people think, it seems to disregard the needs of urban dwellers who can't charge nightly in the private garage of a single-family home. Despite such disagreements, it's generally agreed that the infrastructure will gradually make EVs easier to own; how soon and how much remain to be seen.

So, plug-in hybrids might be the best solution for consumers who are serious about going electric, but are concerned about making the investment. However, most EV manufacturers, energy experts and early EV adopters are betting that range anxiety might simply fade away as people become accustomed to the concept. According to the testimonials of people who use EVs for everyday tasks, another way to get over range anxiety is to simply drive one.