by Akweli Parker
Prev NEXT
4 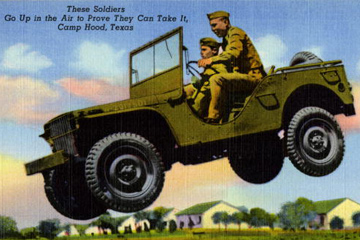 If ever there were a customer that really needed a car-like, compact vehicle that could do the impossible, Uncle Sam circa World War II would be it. Out of an urgent request from the U.S. Army was born one of the most iconic car brands of all time: Jeep.

The original Jeep design was developed by the Bantam Car Company in 1940, meeting an incredible 49-day deadline imposed by the government. With worries about Bantam's ability to produce the vast war-time quantities the government would need, Willys-Overland and Ford were called in to actually produce the vehicles [source: Heritage Region Jeep Alliance].

From its early testing, through its stellar military service in World War II, through its transition to civilian life in multiple variants, the Jeep proved rugged, versatile and highly capable. No one would ever mistake it for a Lamborghini in the looks department, but even art critics came to praise its utilitarian melding of form and function. The Museum of Modern Art in New York praised it as "a purely utilitarian design that forgoes styling in favor of efficiency and function" [source: Museum of Modern Art].

It could tow artillery cannon onto the battlefield. It could cross shallow rivers and flooded areas on the count of spark plugs, air filters and oil filters that were placed high in the engine compartment. It could traverse muddy, hilly and overgrown terrain that stopped other vehicles in their tracks.

It kicked behind on the battlefield -- thanks to the provision of a machine gun mount. And it ferried enlisted men, officers, dignitaries, even movie stars, around military installations quickly and efficiently [source: Archive.org].

After the war, "Jeep" became much more than a tough vehicle -- it became a brand synonymous with adventure, ruggedness and four-wheeling fun.