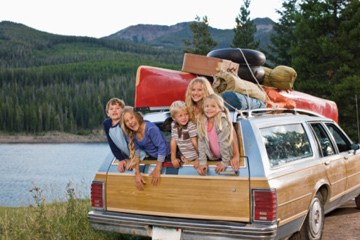 At one time, station wagons were considered the perfect vehicle for a family vacation.
Darrin Klimek/Getty Images

Come on, now. Think about it. If station wagons hadn't come to be permanently associated with the Brady Bunch and the Griswold family vacations, they'd still be ruling the roads and considered a prime symbol of upwardly mobile socio-economic status. Instead, they became a mobile metaphor for middle-class blandness and found themselves vanquished by the minivan in the mid-1980s. The wagon body style never went completely away, really. Especially in Europe and other places abroad, where car culture can differ from that in the United States as much as social culture. One thing's for certain, with their introduction in the 1920s, station wagons were the first vehicles to execute on the idea of melding a car's comforts and everyday drivability with the practical hauling ability of a truck.

So how did station wagons get their name? Back in the early days of automobiles, they were originally called "depot hacks," since they were hacks (taxicabs) that people used in coming and going to train depots (stations).

The earliest station wagons were regular cars such as the Ford Model T modified with more expansive back ends to accommodate the luggage of taxi customers. The first "production" car that was purpose-built as a station wagon, according to the site, was the 1923 Star, built by Durant Motors Co. [source: Manning].

Early station wagons had all-wood or wood-paneled wagon bodies, and were called, appropriately enough, "woodies." In later years, manufacturers transitioned to all metal or to vinyl insert panels made to resemble wood but last longer.

Distinctive features of station wagons are that they have between three and five doors; a configurable interior that allows for either more passenger room or cargo room in the back; an extended rear with a steep vertical drop at the back (as opposed to a trunk); and possibly a beefier rear suspension than a sedan model, to better handle heavy cargo loads.

Many of today's crossovers perform the exact duties of the station wagons of antiquity, just updated with more avant garde styling and higher ground clearance. They even share the familiar "two-box" profile. Just please don't call them "station wagons."