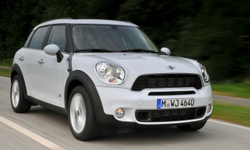 There are a few pleasant surprises in the Countryman, like a three-person rear bench seat and being named a 2011 Top Safety Pick by the Insurance Institute for Highway Safety (IIHS). The Mini Cooper Countryman will set you back about $22,000 to start, with options adding to the price -- and possibly lower fuel economy [source: MiniUSA.com].