by Kristen Hall-Geisler
Prev NEXT
5 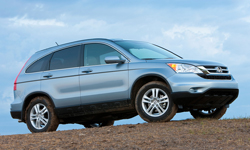 The 2011 Honda CR-V
Courtesy of Honda

The small size, SUV styling, and great gas mileage have made the Honda CR-V the best-selling SUV for four years in a row -- starting its streak before the crossover category had even gained traction. The base model, which gets the best gas mileage, starts at about $21,500 [source: Honda.com].