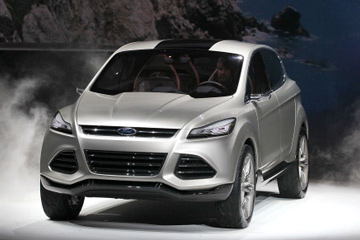 The Ford Escape is doomed. Well, not really, but soon the Detroit automaker intends to merge the compact SUV with its European counterpart, the Ford Kuga, and create the Ford Vertrek, which debuted in concept form at the 2011 Detroit Auto Show. The name comes from the Afrikaans word for "departure" and Ford hopes that it will be a departure from the way that they've been making SUVs up until now. In other words, this is not your father's (or your older brother's) Escape.

The Vertrek is based on Ford's C platform, just like the Focus, and uses Ford's new Kinetic design language to give it a fast, muscular look. Think of it as a combination of European styling, a la the Kuga, and American cargo space. It should go into production in 2012.