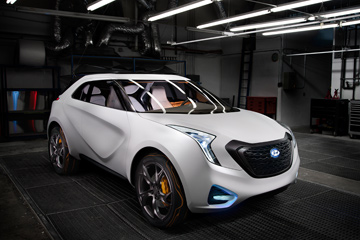 What's an "urban activity vehicle"? We aren't sure, but that's how Korean automaker Hyundai describes its upcoming Curb crossover, a compact model aimed at younger, urban drivers who want their cars to look like something that's just been sent back from the city of the future. The interior features multiple touch screens for passengers as well as driver, and there's a heads-up display on the windshield for the GPS. The car can even send your current location to your Facebook page. Music is provided by Pandora Internet, for a customized sound mix.

To give it that tough urban look, the car's designers have taken its external cues from the edgy look of a motorcycle. Its headlights wrap around the hood in an angular lightning bolt pattern. This is one crossover you wouldn't want to meet in a dark alley -- unless you were driving a full-sized SUV. Expect to see it at dealers in 2013.