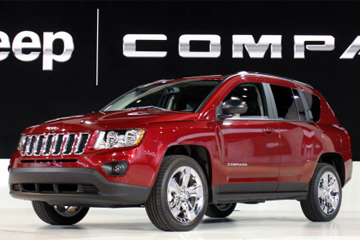 If AWD is on your list of must-haves in a crossover, then you'll want to check out the newly redesigned Jeep Compass. It's AWD and optional off-road packages will leave other crossovers sitting at the edge of the pavement while it tears through the wilderness.

The Compass was updated for 2011 and shed some of its former unfortunate styling. The newest version looks more like a shrunken doppelganger of the Grand Cherokee, a purposeful achievement according to Jeep. The inside of the Compass remains relatively the same compared to the previous versions, and being a low-end Jeep you probably shouldn't expect too much compared to other crossovers in its class.

Where the Compass really starts to shine is with its available Trail Rated off-road package. The Trail Rated badge is given to Jeep vehicles that have met certain off-road standards that Jeep has set for itself. Trail Rated Jeeps need to meet specific approach and departure angles when performing off-road and have ample ground clearance as well. Approach and departure angles are the distance from the front or the rear of the vehicle to the ground as it climbs over an object. If the approach or departure angles are too short, then you'll scrape the bottom of your vehicles as you start to climb over it or as you leave. Or worse, you won't be able to go over it at all.

For those hesitant to accept a trail-rated badge from the same people who built the vehicle, consider the 8.4 inches of ground clearance, skid plates, tow hooks and a CVT engine that allows for a low range option when for off-roading. The Compass receives an improved AWD system for the new model, called the Freedom Drive II. The Trail Rated Compass also comes with features like a hill decent traction and brake traction system that add to its off-road capabilities.

The Jeep Compass starts at just over $19,000 and with the AWD Trail Rated version with the price will be closer to $25,000 [source: Jeep]. Although the Compass may be the most capable AWD off-roading crossovers, don't expect it to stick around for very long. With Fiat's partial ownership of Chrysler, the Compass is scheduled to be discontinued in 2012 or 2013 in favor of a Fiat-based vehicle. But if you're looking for an AWD system that'll let you play in the mud, then this is still the AWD crossover for you.

On the next page we'll look at another AWD crossover, but one that has a tad bit more personality than the Compass.