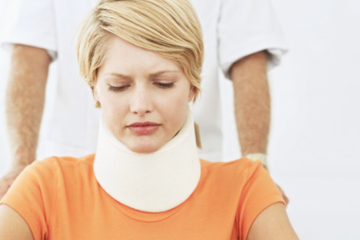 Do you remember when people would walk around with neck braces as a form of whiplash treatment? See more pictures of car safety.
George Doyle/Stockbyte/Getty Images

So there you are sitting in your car waiting for the light to turn green, thinking that your worst problem is going to be getting back to the office before your boss notices that you've just taken a two-hour lunch break. Then, suddenly--

POW! The driver behind you, who was probably busy worrying about exactly the same thing, plows right into your rear bumper. Your adrenaline level shoots through the roof, because some prehistoric instinct tells you that you've just been attacked from behind by a saber-toothed tiger, but that's not your worst problem at the moment. Your worst problem is that a tiny fraction of a second ago you were sitting stock still and now, before you can prepare for it, your torso is moving forward and your head is snapping back. You aren't necessarily moving forward very quickly. The car that nudged your rear bumper may only have given you about a 15-mile per hour (24.1-kilometer per hour) kick and your seat harness (you were wearing one, right?) kept you from getting knocked against the dashboard. But that doesn't mean your body didn't get injured. You just might not be aware of it yet.

The accident we've just described is the single most common kind of car accident there is: the typical fender bender or rear-end collision. And it can lead to the most common (and probably the subtlest) type of driving injury: whiplash.

Whiplash! You're heard that term before, right? You've also heard that it's something you want to avoid, because it causes chronic pain and neck movement problems. If you're old enough, you remember when people would walk around with neck braces as a form of whiplash treatment. (Doctors don't like to do that as much these days, because it doesn't seem to help a lot.) So what do you if you're on the front end of a rear-end collision and start developing the neck pain, headaches and dizziness that are symptoms of whiplash? You see a doctor, of course. But there's not much a doctor can do for whiplash except prescribe special exercises and recommend over-the-counter pain relievers. There's no cure for whiplash -- except time. Over a period that can range from days to months, the symptoms simply go away, but you mostly just have to wait it out.

So the best way to deal with whiplash is not to get it in the first place. That's easier said than done, of course. There's not much you can do about that absent-minded driver who bumps you from behind, but automakers have stepped in to give you a hand. They've begun designing devices that will protect you from whiplash the way seatbelts and shoulder harnesses protect you from getting thrown through your car's front windshield. But to understand how these devices work, we'll first have to understand exactly what whiplash is.

Getting Bent Out of Shape

First off, there's no such medical condition as "whiplash." This is just what normal people like you and me call it; it's a term that goes back about a century. A doctor would call it something with a lot more syllables, like a cervical hyperextension injury. The advantage of a long name like that is that it tells you something about what it is and what caused it: It's a case of extending your cervical vertebrae ("neck bones," to you and me) into a position where they shouldn't have been.

Let's go back and look at a slow-motion instant replay of that fender-bender accident. There you were, sitting still in the driver's seat (or maybe the passenger's seat), minding your own business. Then your car starts moving forward unexpectedly, but nobody tells your body that it should be moving forward along with it. The first clue your body has that it should join in on the movement is when your car seat hits the back of your torso, shoving the lower middle of your spine in the same direction that the car is moving. After that it takes a tiny fraction of a second for the upper part of your spine, where those neck bones are, to catch on to the fact that it's supposed to be moving too and during that fraction of a second your head snaps back, bending your spine into an s-shape not usually found in nature. This puts a strain on the soft ligament tissues that hold your spine together. Before even a single second has elapsed, the neck realizes that the lower spine is moving forward without it and rushes to catch up, correcting the s-shape. Everything's back to normal -- maybe.

Nobody knows exactly what part of this s-shape -- a position that your spine really only occupies for a fraction of a second -- causes the symptoms of whiplash, but it's clear that your body wasn't intended to deal with the sort of stress that the rear-end collision puts on your ligaments. (This sort of fraction-of-a-second spinal strain can be caused by other things in addition to rear end collisions, but in our modern world of ever-more-frequent automobile travel, it's the most likely scenario.) What we do know is that a few hours or days after the accident the whiplash symptoms can start to arrive and they can do everything from putting you through excruciating pain to making it difficult to move your neck. They can give you headaches, dizziness, fatigue and a ringing sound in your ears. Or maybe you'll luck out and none of these things will happen. The human body is a funny thing.

Since it'll probably be a while before rear end collisions can be prevented altogether (although self-driving cars and cars with radar-based collision avoidance are moving us in that direction), the best thing that automakers can do in the short run is to redesign car seats so that the s-shaped spine typical of these accidents isn't likely to happen. And that's exactly what they're doing. 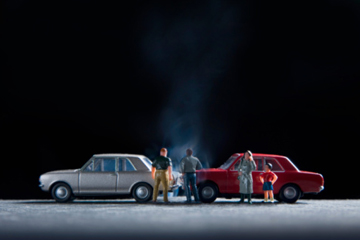 As the technology spreads, whiplash may no longer be the most common of all driving injuries.
Andrew Bret Wallis/Digital Vision/Getty Images

Seat belts and harnesses really don't do much to protect your neck, at least not from the relatively small motions that are responsible for whiplash. Sure, when the harness snaps into place during a collision it can stop your torso from moving forward more than a few inches, but in the meantime your spine is busily coiling and uncoiling itself like a nervous snake. So what's a poor carmaker to do? Well, Toyota has come up with what they call a Whiplash Injury Lessening (WIL) Concept Seat. The cause of whiplash is the differential motion of your torso and head during the collision, so the principle behind a WIL seat is to keep these two parts of your body moving (or not moving) at exactly the same speed during the forward snap caused by a rear-end collision. But short of strapping the driver down with duct tape to prevent any forward movement at all, how exactly can they do this?

There are two parts to the WIL system. The first is in the back of the seat, which cushions the part of your spine that runs through your torso. This part of the seat is deliberately designed to compress during the forward motion of the collision, to minimize the pressure that pushes your torso forward. The second part of the system is in the headrest. As the lower part of the seat pushes against your torso, it also sends a signal to the headrest telling it slant upward at a diagonal angle (which is the position your neck is in when the s-shape occurs), then it pushes your head forward at exactly the same rate the back of the seat is pushing your torso forward. Result: Your spine maintains its normal shape during the collision and doesn't get bent. Ligaments aren't strained. Whiplash symptoms are less likely to occur.

At least that's the theory. The WIL seats are just starting to appear on models like the 2012 Camry and Lexus CT. The evidence so far is that, while whiplash may not completely be abolished by this new technology (something that still may not happen until self-driving cars come along), the severity of the injuries are now a lot less than they were before this technology arrived. And as the technology spreads to other models and manufacturers, whiplash may no longer be the most common of all driving injuries. It may be not even be very common at all.

While I won't claim I've never been rear-ended by another car, I've been lucky enough never to get a case of whiplash. What fascinated me in writing this article was learning just how common such injuries are, constituting 40 to 50 percent of all car-accident-related physical problems. So it's good to know that as modern automobiles have become more sophisticated, more automated and more computerized, something can actually be done about the physical forces that bend your body out of shape when bumped from behind. Maybe my perfect record of never having a whiplash injury will continue into the future. And maybe yours will, too.