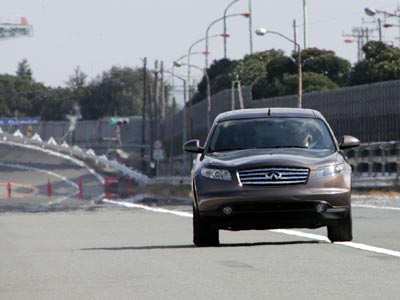 Since the 1960s and 1970s, the number of crashes and the fatalities and injuries associated with these crashes have dramatically decreased. This can be attributed to a series of car safety laws passed both on the national and statewide level.

Historically, these improvements have tended to happen gradually. Take, for instance, the introduction of the seat belt in the 1950s. This simple device didn't make an immediate impact on drivers. In fact, for a long time, seat belt use was very low, remaining at about 10 to 15 percent nationwide. But in 1965, for every 100 million miles (160,934,400 kilometers) driven in America, there were almost six fatalities -- a dangerously high statistic. But from 1984 forward, seat belt use has steadily increased due to several laws and strong enforcement campaigns like the familiar "Click It or Ticket" push. Now, at the beginning of the 21st century, there are fewer than two fatalities per every 100 million miles (160,934,400 kilometers) driven in America [source: Lemmen].

In recent years, however, as drivers have expressed more demand for auto safety features and better crash-rating systems, automakers have quickly begun incorporating more sophisticated technology into their designs. One of the major developments that designers are hoping will reduce the number of fatalities and injuries on the road further is the introduction of something called a pre-collision system (PCS). This type of technology constantly evaluates a driver's position as well as any objects on the road, in order to prevent or minimize damage that may be caused by an accident.

Because of the automatic nature of most pre-collision systems and the unpredictability of most accidents, the technology behind a PCS design is highly complex and must be finely tuned and tested. As you might guess, testing is a critically important part of the process to make sure everything works just right when the system is in action. The last thing a driver wants when he or she is calmly driving down an open road is the brakes to unnecessarily bring the car to a screeching halt.

So how do pre-collision systems work, anyway? How is a computer able to determine when the driver in the other lane is merging -- or rather, when that driver isn't supposed to be merging? Continue on to the next page to find out. 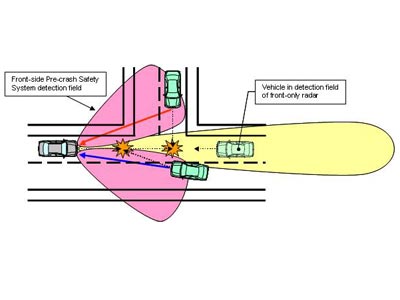 There are generally two kinds of safety systems in automobiles -- passive and active.

A passive safety system is anything in a car or truck that, for the most part, sits idle and operates only when necessary. A good example of this is a common seat belt. Once a passenger buckles a seat belt, the belt won't automatically lock into position until the car makes a sudden stop. Some might call airbag systems passive safety, too. However, you could argue that because they rely on impact sensors that determine the severity of an accident, and use that information to determine how quickly they inflate and how long they should stay inflated, airbags could fall into the active safety category.

An active safety system is very different from a passive safety system, especially when you're talking about pre-collision systems. Active systems operate based on signals and information gathered, and they typically either alert the driver to a dangerous situation or assist in important maneuvers like steering while braking. These systems actively seek out information in regards to the vehicle's current state.

Although early collision detection units used various technologies like infrared waves to detect objects, most pre-collision systems today work with the help of radar. Anything that's a wave, like a sound wave, can bounce or echo. You may have experienced this by shouting down into a well or over a deep canyon, only to hear the sound of your voice bounce back and reverberate. Instead of sound, however, radar systems use radio waves. Radio waves are invisible and they can travel much farther than sound.

Pre-collision systems place small radar detectors up near the front of the car, usually within the grill, where they constantly send out quick bursts of high-frequency radar waves. These waves will bounce off the nearest objects and return to the sensor, where a separate unit connected to the sensor calculates how long it took for the signal to leave and bounce back. With this information, a PCS unit can determine another car's position, distance, speed and relative velocity almost immediately, and if any sudden changes in those factors could potentially cause a collision, the system can provide information or assist the driver in avoiding a potential accident.

So, now that we know that if a pre-collision system recognizes a potential car crash, it can't just sit there and let chaos ensue. What do pre-collision systems actually do to help out drivers, and what kinds of systems are available in vehicles right now? Read on to find out. 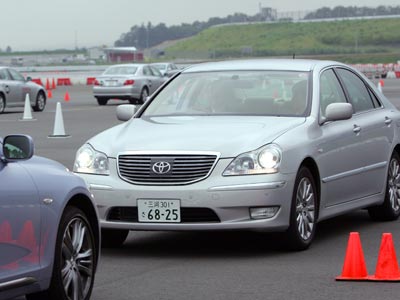 Some systems sound an alarm to notify drivers that a collision may be imminent -- a sound simply to alert the driver and get him or her ready to take evasive action. Other systems actually take control of certain aspects of the car. There are pre-crash brake systems, which apply additional pressure to the car's brakes to assist the driver in slowing the car down as fast as possible and potentially reducing damage caused by an accident. Some systems also connect the PCS unit to a pre-crash seat belt system, which can automatically tense passengers' seat belts before a crash. These are often referred to as seatbelt pretensioners. The development of these types of systems needs to be fine-tuned and highly accurate, since any malfunction could disrupt a drivers' attention and potentially cause an accident. Obviously, designers and manufacturers put pre-collision systems through rigorous testing to ensure that this doesn't happen.

One of the earliest uses of accident detection was the Mercedes-Benz Pre-Safe system in the 2003 S-class sedan, which the company touted as the "world's first production car equipped with an astonishing new system that can sense a possible collision a few seconds in advance and take pre-crash protective measures." The system used sensors to measure the car's steering angle and acceleration, but not its surrounding environment -- actions such as pre-tensing of the seat belts, automatic sunroof closing and raising of reclined seats were triggered during any emergency maneuver [source: Mercedes-Benz Canada].

More recent accident detection technologies use radar systems, like Toyota's Pre-Collision System. The company introduced its PCS in 2003 on a vehicle sold in Japan called the Harrier. In 2010, the system will be available on the Toyota Prius. The system uses millimeter-wave radar to determine when additional braking assistance is required as well as when to apply tension to the seat belts. Toyota has also added pre-crash seatback preparation for rear seat occupants. If a crash situation is imminent, reclined rear seats are automatically brought to an upright position.

Ford has also announced its own radar system, called "Collision Warning with Brake Support," for its latest models of the Ford Taurus, the Lincoln MKS sedan and the Lincoln MKT crossover. And Honda and Nissan also offer lane-deviation prevention and front collision avoidance systems on many of their domestic models.

For more information about pre-collision systems, hybrid cars and other related topics, follow the links the next page.