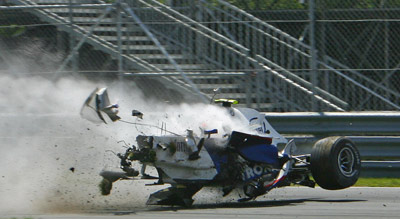 Some crashes, such as this one involving Formula One driver Robert Kubica, look spectacular and horrifying. In fact, the destruction of the car likely saved Kubica's life.
DAVID BOILY/AFP/Getty Images

Even if you're not a fan of auto racing, you've probably seen images of spectacular crashes in which cars tumble down the track, flinging parts in every direction as the car is literally destroyed. Yet miraculously, the driver climbs out of the twisted wreckage and walks away uninjured. While these crashes look horrifying, all that spectacular destruction is spending kinetic energy. It's probably not a fun ride for the driver, but the car is doing exactly what it was designed to do in this situation -- protect the person in the driver's seat.

There have also been rare occasions when a race car has struck a solid object at high speed, such as NASCAR driver Michael Waltrip's crash at Bristol in 1990. He hit the blunt end of a concrete wall at racing speeds, and the car stopped very suddenly. The impact generated enormous forces, yet Waltrip was unhurt. The reason is evident in looking at the remains of his car on that day. It was completely and utterly destroyed. All that force was spent on the destruction of the car. Clearly, the incident went well beyond the abilities of any crumple zone, and in fact it was simply a matter of luck that nothing intruded into the driver's compartment to injure Waltrip. Force redistribution saved his life.

The aftermath of the crash that killed Dale Earnhardt, Sr. His car, the black #3, does not appear to be heavily damaged.
Robert Laberge/Allsport/Getty Images

There is an unfortunate counterpoint to the concept, however. From the 1980s to the early 2000s, there were numerous racing fatalities due to overly stiff chassis. Probably the most widely known incident is the death of Dale Earnhardt Sr. in the 2001 Daytona 500. The crash didn't initially appear to be severe, and the car didn't seem to suffer extensive damage; however, that was exactly the problem. A great deal of the force of impact was transferred directly to the driver, causing immediate and severe injuries. The fatal injury was a basilar skull fracture, an injury to the area where the skull and spinal cord connect. This injury is the cause of death in many auto racing accidents, and it occurs when the head snaps forward on impact while the body remains restrained by safety belts. While head and neck restraint devices have lowered the incidence of basilar skull fractures, reducing impact forces on the driver have played a major role as well.

Several other well-known drivers were killed during this period, as well as lesser-known drivers in NASCAR modified and late models classes racing at tracks throughout the United States. The reason behind the increase in fatal crashes was simply the pursuit of higher performance. Car designers and crews sought better handling by creating a more rigid chassis. This included adding components to the frame, using straight frame rails, and switching to steel tubes with thicker walls. Sure, they made the chassis more rigid, but when these inflexible cars hit a wall, there was no give. None of the force was absorbed by the car -- the driver took most of the impact.

Even before Earnhardt's death in 2001, race tracks were trying to find solutions to this problem. Tracks in the northeastern United States experimented with giant blocks of industrial Styrofoam lining the walls, a similar concept to the soft wall technology used on many superspeedways today. More importantly, the cars were changed. Thinner-gauge steel tubing is now used on certain portions of the chassis, and frame rails are given a bend or notch so they deform somewhat predictably on impact.

NASCAR's Car of Tomorrow, used in Sprint Cup racing, has foam and other impact absorbing material inserted into critical areas of the frame. Although auto racing will always be a dangerous sport, the use of less rigid chassis construction, soft wall technology and head and neck restraint systems have greatly reduced crash impact forces on drivers.

For more information about automotive safety devices, racing and other related topics, follow the links below.

Volvo has been developing another impact absorbing technology for use in small cars. The driver's seat is mounted to what is basically a sled on a rail, with shock absorbers in front of it. In an impact, the whole "sled" (seat and driver included) slides forward up to 8 inches, and the shock absorbers literally do their job, absorbing the shock of the impact. At the same time, the steering wheel and a section of the dash board slide forward to make room for the driver. Combined with a front crumple zone and possibly an airbag, this system could greatly reduce the forces acting on the driver in a front-end collision [source: Ford Motor Company].