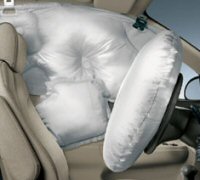 On January 23, 2000, Derrick Thomas, nine-time Pro Bowl linebacker for the Kansas City Chiefs, was paralyzed in a single-car accident in Kansas City, Missouri. Thomas lost control of his 1999 Chevy Suburban on an ice- and snow-covered highway and rolled the vehicle. Neither Thomas and nor his friend Michael D. Tellis were wearing their seatbelts, and both were thrown from the vehicle. Tellis was pronounced dead at the scene, and Thomas died two weeks later on February 8 when he suffered a pulmonary embolism. A third passenger, John C. Hagebusch, suffered only minor injuries. Hagebusch was the only passenger wearing his seatbelt.

Thomas' mother filed suit against General Motors for wrongful death, claiming design flaws in the Suburban caused the accident. In 2004, a jury ruled that Thomas' family was not entitled to any money from GM as a result of the accident. Reports indicate Thomas was weaving in and out of traffic and driving too fast for the snowy conditions. Couple those poor decisions with the fact that he wasn't wearing a seatbelt, and it appears that the jury made a wise decision.

In this article, we'll look at the safety reputations of SUVs, find out what safety features to look for when purchasing an SUV and get some SUV driving tips. 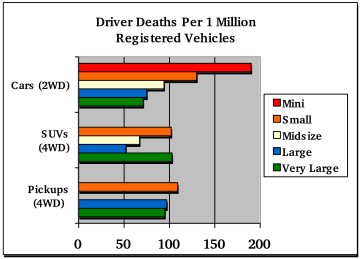 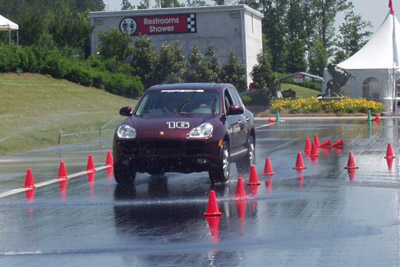 The following active safety features are designed to help you avoid an accident.

Most vehicles today are available with anti-lock brake systems (ABS). If anti-lock brakes do not come standard on the SUV you intend to buy, be sure to choose ABS as an option. While ABS does not generally help a vehicle stop quicker than conventional brakes do on dry pavement, it has two distinct advantages. First, and most importantly, ABS allows you to steer your vehicle under full braking power. This is because ABS pumps the brakes many times per second (much faster than a human can), preventing wheel lockup and helping to maintain steering control. That means when that car suddenly stops in front of you, you can brake hard and still steer over to the shoulder if you won't stop fast enough to avoid an accident. In these instances, ABS can be the difference between a fender-bender and a close call.

Second, ABS can help you stop quicker on slippery pavement. Porsche invited Consumer Guide® to Barber Motorsports Park in Birmingham, Alabama, for an SUV safety driving program. In simulated icy conditions at the Porsche program, an ABS-equipped vehicle stopped in a reasonable distance. With the ABS deactivated, our test Porsche Cayenne continued to skid for a distance that would have been at least twice as far as the ABS-equipped vehicle. In fact, it wasn't until the Cayenne left the simulated icy surface and got onto a wet asphalt surface that it had any grip at all. A well-trained driver may be able to pump the brakes and prevent a skid, thus stopping quicker. However, most drivers press the brake pedal in an emergency situation, making ABS the better choice.

An anti-skid system uses several sensors to detect a loss of grip in your vehicle, then works with the anti-lock brake system to apply individual brakes to help keep the vehicle on its intended path. In some cases, an anti-skid system also reduces engine power.

So what does this mean to the driver? Well, if you approach a corner too rapidly and your vehicle begins to plow straight ahead, an anti-skid system will detect that the vehicle is not on its intended path and intervene by applying the inside brakes. This will rotate the vehicle through the turn and, hopefully, save you from going off the road. Anti-skid systems can't defy the laws of physics, so they won't help you take a 90-degree turn at 100 mph, but they can be quite helpful in most driving. Anti-skid systems are available on most SUVs, but they are usually optional. Make sure to order your SUV with an anti-skid system.

All-wheel-drive and four-wheel-drive systems allow all four wheels to transfer power to the road. Though not generally considered a safety feature, AWD or 4WD can provide the additional traction you may need to accelerate out of harm's way.

Next, we'll take a look at passive safety features.

If you are interested in learning more about the capabilities of SUVs in general and the Porsche Cayenne in particular, Porsche offers a two-day performance driving course at Barber Motorsports Park in Birmingham, Alabama. The cost is $2995 for a course that blends on-track and off-road driving in Porsche vehicles provided by the school. Activities include classroom sessions, wet and dry autocrosses, slalom and high-speed lane-change exercises, and off-road and racetrack driving. For more information, visit PorscheDriving.com or call (888) 204-7474. 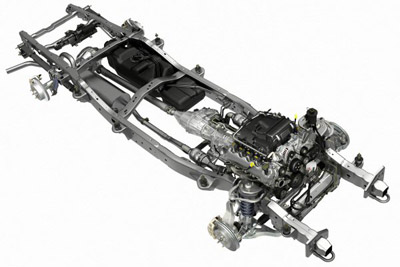 Safety features can often help you avoid an accident. But there are also other simple driving practices that can mean the difference between an accident and an incident-free drive. Size matters. Midsize cars generally weigh between 3000 and 4000 lb. Midsize SUVs weigh 3700 to 5000 lbs, and large SUVs weigh 5000 to 7100 lbs. The extra weight makes stopping and changing direction more difficult. To compensate, you should:

It shouldn't take a tragedy like the Derrick Thomas accident to make drivers realize that SUVs can be dangerous. All vehicles should be treated with respect on the road. After all, barreling along the highway at 70 mph in a two-ton vehicle does have its inherent physical risks--and SUVs can be even more dangerous given their extra weight. However, if you make the right choice when you buy and follow some common sense driving procedures, and you can feel safe in your SUV.

For more information on vehicle safety, visit the Insurance Institute for Highway Safety's site. Here you can find individual crash-test ratings and safety publications such as "About Your Airbags," "Kids and Airbags," and "Shopping for a Safer Car." Also visit the National Highway Traffic Safety Administration's site, which includes the government's crash-test ratings and numerous other reports with valuable safety information