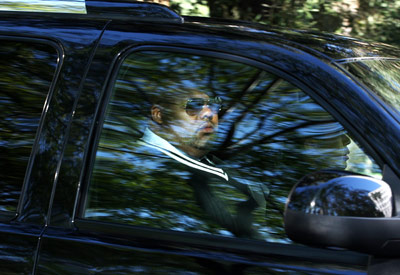 When car companies run ads on television touting their vehicle's new safety features, they rarely mention the car's windshield or the surrounding windows, but the glass surrounding you in those vehicles has been designed and manufactured with your safety in mind. Although automotive glass looks the same as any other type of glass, it functions very differently.

In most homes, the windows in each room are made from a standard type of glass that will shatter into large shards when it breaks. With the exception of a sliding glass door or front door, these home windows don't receive the same amount of strain that an automotive window does. A car, on the other hand, will encounter many potholes, rocks and fender benders in its lifetime. Because of this, automotive glass is manufactured into two different types of safety glass to protect both the structure of the vehicle and the occupants inside. The first type of glass is called laminated glass, which is for the windshield. The second type of glass is known as tempered glass, which is used for the vehicle's side and back windows.

Later on, we'll learn how glass makers insert a thin layer of film between two layers of glass and fuse them together through heat and pressure to make laminated glass. We'll also take a look at how tempered glass gains its strength through a process of heating and rapid cooling. Without these different styles of manufacturing and strengthening, automotive glass would be little more than a simple barrier between us and the elements outside.

Laminated and tempered glass each have different functions, but together, they keep you inside the vehicle in an accident, shield you from flying sharp glass, retain the roof's rigidity in a rollover and allow the side air bag to protect you when it's deployed. Let's go on to the next page and learn when these types of glass were first used and why.

The History of Automotive Glass

During the early 20th century, horseless carriages started using glass to protect drivers from harsh winds. However, the standard form of glass used in those times didn't adequately protect occupants from flying debris. It also posed a risk to the occupants if an object struck the glass or if the vehicle was involved in an accident.

In 1903, French chemist Edouard Benedictus stumbled upon the secret to shatter-resistant glass when he dropped a glass flask filled with a dried collodion film. He found that the glass coated with the film cracked, but kept its original shape. However, this laminated glass wouldn't be implemented in automobiles until the 1920s [source: Time].

Automakers used laminated glass in their windshields to optimize occupant safety during accidents and to protect passengers from projectiles during normal driving conditions. For all its benefits, though, the first types of laminated glass offered limited puncture resistance. Today's laminated glass consists of a thin layer of polyvinyl butyral (PVB) inserted between two layers of solid glass.

In addition to laminated glass, automakers began to use tempered glass in the late 1930s. This type of glass is used in the vehicle's side and back windows and gains its strength through a heating and rapid cooling process that strengthens the glass' outer surface as well as its core.

By the 1960s, the American public had become increasingly aware that automobiles needed to be designed for more than just looks. This realization derived partly from consumer crusader Ralph Nader's work to expose the dangers posed by certain vehicles and the need for government safety standards. In response, the U.S. government formed the National Highway Traffic Safety Administration (NHTSA) in 1970 [source: Bowen].

Since then, NHTSA has implemented regulations affecting all areas of vehicle safety, including automotive glass. Some of the Federal Motor Vehicle Safety Standards (FMVSS) for automotive glass include:

Now that we know how automotive glass came to be, let's find out how it's made. 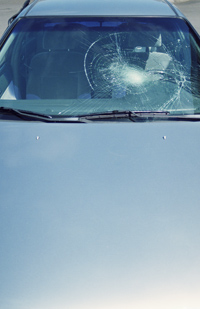 Laminated glass is made by sandwiching a layer of polyvinyl butyral (PVB) between two pieces of glass. The glass and the PVB are sealed by a series of pressure rollers and then heated. This combination of pressure and heat chemically and mechanically bonds the PVB to the glass. The mechanical bond occurs through the adhesiveness of the PVB, while the chemical bond is created through hydrogen bonding of the PVB to the glass.

That inserted layer of PVB is what allows the glass to absorb energy during an impact and gives the glass resistance to penetration from flying projectiles. It also deflects up to 95 percent of ultraviolet (UV) rays from the sun [source: Reuters]. Laminated glass can break and be punctured, but it will stay intact because of its chemical bond with the PVB.

The strength of laminated automotive glass allows it to perform two very important functions in cars. First, it allows the passenger-side air bag to deploy correctly. Driver's side air bags tend to fly straight toward the driver from the steering wheel, but when the passenger air bag is deployed, it bounces off the windshield toward the passenger. An air bag deploys with incredible speed --1/30th of a second -- and can withstand 2,000 pounds (907 kilograms) of force. The windshield has to absorb both the speed and force of the air bag in order to protect the passenger in an accident. Because of its strength, laminated glass can keep occupants inside the car during an accident. In the past, occupants could be ejected through the windshield because the glass wasn't strong enough, but today's windshields provide more security.

In addition to absorbing the force of deployed air bags and keeping passengers inside the vehicle, laminated windshields also provide strength to a car's roof. Windshields keep the roof from buckling and crashing down on passengers completely during a rollover. Without the rigidity and strength of laminated glass windshields, many roofs would pose greater risks to passengers in certain kinds of accidents.

If you happen to find a small chip in your windshield, don't worry. You don't have to go out and get your entire windshield replaced to retain its strength. Some small chips can be quickly and easily repaired with a windshield chip repair kit. Most automotive stores carry these kits for around $10 and allow you to inject resin into the trouble spot and remove excess air in the problem area. Once you've repaired the glass, you'll barely be able to notice your patch job.

Let's move on to the next page to find out how tempered glass is made and how it protects.

Tempered glass is just as important to a vehicle's safety as laminated glass, but it differs greatly in both form and function. This type of glass is used for the surrounding windows of car (also called the sidelites) and the back window (or backlite). Tempered glass is created by heating and then rapidly cooling the glass to room temperature by ushering it through a system of blowers.

The surface of the glass cools much faster than the center of the glass and contracts, causing compressive stresses, while the center of the glass expands because of its temperature, producing tensile stresses. What does that mean? Imagine a piece of glass that could be pulled or stretched to a certain length (tensile stress), while being pushed down and compressed (compressive stress) simultaneously. Both the pulling and pushing stresses achieved through the heating and cooling process give tempered glass its tensile and compressive strength. The differences between these two give the glass 5 to 10 times the amount of strength it originally had.

The edges on a typical piece of tempered glass are very weak. This is caused in part by the rapid release of heat during the cooling phase of the tempering process. To help compensate for this weaker area, the glass is ground down on the edges. When tempered glass breaks, it shatters into small, dull pieces. The differences between the compressive and tensile stresses are what enable the glass to break in this way. The pulling and the pushing of the glass produce a significant amount of energy during the tempering process. When the glass breaks, this energy is released and causes the glass to break into small pieces [source: AIS Glass Solutions].

Because of its strength, tempered glass can withstand the daily use of automobile driving. Without it, our cars would be filled with glass every time we encountered a pothole, got into a fender bender or closed a door.

Because of its strength and solid safety record, some car manufacturers are considering the implementation of laminated glass into all areas of their cars. It's already in use in some larger vehicles: General Motors has installed it in the back windows of their passenger vans to keep occupants inside the vehicle during major accidents. Some manufacturers, like BMW, have already placed laminated glass in the sidelites of some of their models as an extra protection from theft. In addition to the safety boost it provides, laminated glass also acts as a good sound dampener because of the PVB inside it [source: Allen].

However, there's one problem with implementing laminated glass throughout a vehicle: In an emergency, an occupant needing to exit the vehicle quickly couldn't break the laminated glass without help. Due to its strength, laminated glass can take 10 times longer to break than tempered glass, which can make escape difficult for a weakened and injured passenger [source: Allen]. This dilemma hasn't stopped automotive designers from devising new ways to get more laminated glass into our cars. For example, cielo roofs (the name comes from the Spanish word for "sky") have been popping up all over the concept car circuit. Cielo roofs extend a car's windshield behind the driver's head, converting the entire roof into a single piece of laminated glass [source: Allen].

Automotive glass isn't only being designed for safety and comfort. Glass makers and car manufacturers are also trying to find avenues for recycling the glass. Although some excess glass produced during the making of automotive glass does get recycled, once the automotive glass is fitted for a car, it becomes harder to recycle because of additions like coatings and heating elements.

Despite these dilemmas, glass manufacturers continue to explore new ideas for making glass stronger, safer and adaptable for new vehicles. You might not think about it much, but our vehicles wouldn't be as safe as they are without modern tempered and laminated glass.