Browse the article Why would someone want to steal my airbag? 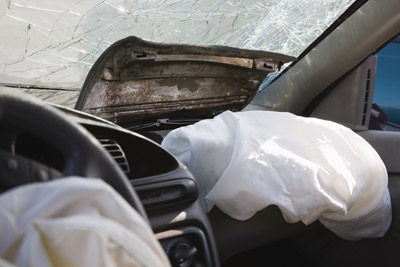 Car Safety Image Gallery Such a small piece of fabric. Such a headache if you don't have one. See more car safety pictures.
Car Culture/Getty Images

If you've had an airbag replaced lately, you already know the short answer to this question: They cost an arm and a leg! Drivers could pay as much as $1,000 just to replace an airbag, plus the costs of labor and to repair a potentially damaged dashboard and/or windshield.

This might explain why many law enforcement agencies are calling airbags "the new car stereos." It's largely due to their growing popularity among auto thieves. If you've ever had your car broken into, you know that feeling of anger and frustration that comes over you when you see that gaping hole in your dashboard; however, the theft of an airbag reaches another level of horrible. Why? Because you'd never know your airbag is missing until the worst possible time. If you are involved in a serious crash, that stolen airbag could lead to a severe injury or even death.

While thieves can break into a car and steal an airbag in less than two minutes, some airbags are stolen as part of a scam perpetrated by unscrupulous repair shops.

In this article, we're going to explain how airbag scams work, why airbags are becoming such a popular target for thieves, and what can be done to prevent airbag theft. 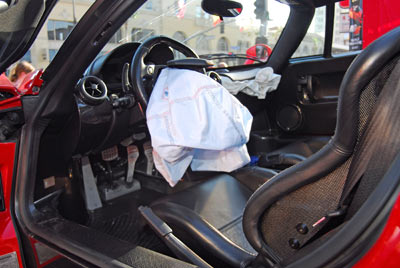 The deployed airbag of a totaled Enzo Ferrari. This rare car sells for up to $1 million, so imagine the cost of an airbag replacement!
Michael Tullberg/Getty Images Entertainment

The National Insurance Crime Bureau claims that thieves in the United States make off with about 50,000 airbags -- worth about $50 million -- each year. The numbers would be even higher if not for older cars still on the road without airbags in them to steal [source: State Farm]. Why would thieves want an airbag in the first place?

Airbags are expensive. The bag itself must be replaced, along with any damaged steering wheel and/or dashboard parts. The sensors and other electronics must also be replaced. It's also a very labor intensive job: An airbag has to be installed by a trained technician. For example, replacing both front airbags in a 1994 Ford Taurus costs roughly $1,800, not including labor [source: Moore]. If the car had side airbags, the cost would be even higher. Despite their cost, airbags are relatively easy to remove, transport and store. The result? A thriving black market for stolen airbags. An unscrupulous mechanic can buy a stolen airbag illegally for $200, then charge the customer the full price and pocket the difference.

In fact, stealing airbags has become so lucrative that some dirty repair shops have gotten into the act themselves. Instead of a thief breaking into your car and yanking out the airbag, which sometimes requires the little more than the removal of just four bolts, mechanics can remove them at their leisure while they "repair" your vehicle.

In one version of the scam, "the pullout," your old airbag is pulled out to look as if it deployed in the accident (even though it actually didn't). Mechanics then replace it with a cheap bag they bought on the black market, or don't replace it at all. Either way, they bill you or your insurance company for the full price of a new airbag.

Another version of the scam, "the switch," happens when you've been in an accident but your airbag didn't actually deploy. Your original airbag is removed, and then another deployed airbag is put in its place. The mechanics bill your insurance company for an airbag replacement, but simply put your old airbag back in. They might also sell your airbag and replace it with a cheap version, or replace it with old rags or similar materials. Without a thorough inspection by a qualified technician, it's impossible to tell if a real airbag is still in place and functional.

Getting a cheaper airbag installed in place of the original might be a scam, but is it really that bad? Lots of airbags are for sale on eBay, so used and undeployed airbags can't be totally bad, right? A used airbag can be a good deal -- if it meets several conditions:

Of course, if the used airbag was installed as part of a repair shop scam, how many of those conditions do you think the airbag actually met? Likely none.

Learn how to prevent thieves from making off with your airbags on the next page. 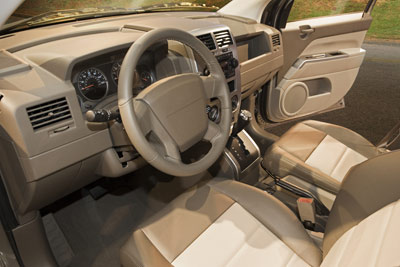 Be wary if your dashboard doesn't look like this. Your airbag could be damaged or missing.
Car Culture/Getty Images

There are a few things you can do reduce the chances of your airbags being stolen. Many of them will help prevent car theft in general: Park in a well-lit location, keep your car locked, and don't leave valuables in plain sight. The use of a steering wheel locking device, like "The Club," could prevent access to the airbag in some cars.

How great is your risk? The airbag black market is just as driven by supply and demand as any other. Because airbags are particular to specific car makes and models, more common cars are in higher demand. For example, the Honda Civic and Acura Integra are popular targets.

Unfortunately, avoiding repair shop scams can be even harder than avoiding theft. Here are a few tips to make sure your airbag is properly and safely installed:

One important thing to remember -- never try to inspect or repair an airbag yourself. If you accidentally deploy the airbag, it could cause a serious injury.

Automakers and legislators could also help prevent airbag theft. Airbag system designs could integrate parts of the airbag into the vehicle more thoroughly. Without the integral parts, the airbag wouldn't work, and removing them would be prohibitively difficult or time consuming. Unfortunately, this would make airbags even more expensive and the already high labor cost of airbag replacement would skyrocket.

A possible legal remedy comes in the form of the National Motor Vehicle Title Information System (NMVTIS). This allows people to electronically check the title on a car to see if it's been reported totaled in another state. While 34 states are part of the program, there are several other states where scam artists can ply their trade. Some states have laws that require accident reports to include information on airbag deployment, or outline the procedures repair shops must follow when replacing them. Other laws designed to combat airbag scams include the Motor Vehicle Theft Law Enforcement Act, a federal law passed in 1984 that created strong penalties for transporting stolen cars or car parts across state lines, and made such crimes prosecutable under racketeering laws [source: Insurance Information Institute].

What's at stake in this fight against airbag theft? More than just higher insurance rates or a hefty repair bill. There have been several incidents in which people were seriously injured or killed because of faulty airbag replacement. In one case, a woman was injured and a passenger killed because their used car had been in a prior accident. The airbag had never been properly replaced and was instead simply tucked out of sight. In a 2005 accident, two teenagers were killed when improperly installed airbags, purchased on the Internet, failed to deploy [source: National Safety Commission].

For more information on airbags and other related topics, please see the links on the following page.