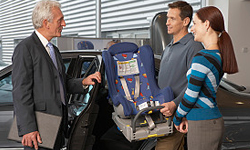 Research has shown that the flexibility in the LATCH system, though minor, leads to confusion. People often install components incorrectly. Others wrongly assume that because one part of the system offers a choice (like whether to use a seatbelt in lieu of the lower anchors), other parts are also optional (such as neglecting the upper tether system).

The recent rise in childhood obesity has also led to problems. Parents might not realize their child exceeds the weight limit for a specific seat model if the height and age are within the correct range.

But once these problems were pointed out, they were quickly addressed. Many manufacturers' websites even offer videos demonstrating correct installation. And the NHTSA is encouraging automakers to provide compatibility information that helps consumers select car safety seats that fit best in their cars. However, it is up to parents to ensure their children are in proper health and that they are correctly fitted to their car safety seats.

So why is LATCH supposedly better, despite all these caveats? Unfortunately, it's often a leap of faith that the car safety seat is installed correctly. But once it is, the top tethers improve safety because old seats that strapped only across the bottom were prone to tipping forward in a crash. Even if the child remained strapped in the seat, head injuries were common, as a result of hitting something (like the back of the front seats) or head trauma from being tossed around. The bottom anchors were designed to keep the seat base more firmly in place against the bottom and back of the car's backseat, and eliminate the freeplay that was common with ill-fitting seatbelt installation.

As long as LATCH is properly used, infant safety seats should remain firmly in place in most crashes, which definitely improves your child's chances of emerging unscathed.