How is active automotive safety tested? 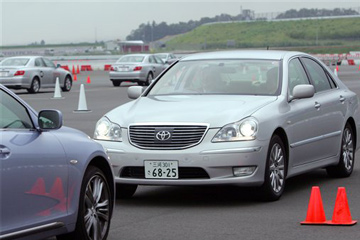 For most of the automobile's history, engineers have focused on finding more and more ways to make vehicles safer. Recently, however, engineers have been implementing new technologies to help drivers avoid accidents altogether. The idea of accident avoidance is the foundation of active automotive safety. These active safety systems include features like brake assistance which can apply and control brake pressure for a driver if he or she hasn't responded to a situation quickly enough, or adaptive cruise control which slows a car down when it's getting too close to another vehicle on the road.

Active automotive safety systems are often complex and expensive, so most of the features are currently only offered in luxury vehicles. However, several auto companies are developing active automotive safety systems and one of them, Daimler AG, has spent a significant amount of time testing the features. Testing of the active systems usually begins in the virtual world where system performance and mathematical algorithms can be tested to ensure that everything works correctly.

Once the systems are examined on a computer, real-world testing begins. This may involve using humans to drive the vehicles, but some active automotive safety testing can be more efficient and safer for human drivers if it's tested using automatically-driven vehicles. These vehicles are put on predetermined paths and set speeds and may involve multiple unmanned vehicles for the test. The cars are controlled using computers over an internet connection and each has the ability to be shut off if they deviate from the planned scenario. The cars are then put in real-world situations set up by the engineers to determine how they'll react in a near-accident scenario. If all goes well, the vehicle uses its active automotive safety sensors and applies the brakes, alerts the driver, or adjusts vehicle settings and stability to avoid a collision.

In most of Europe and in the United States, test ratings for active automotive safety haven't been implemented into the standard safety ratings yet. However, Germany is currently leading the way in making active safety features part of its automobile safety requirements. For now, active automobile safety features are being marketed as driver assistance features because some manufacturers fear that lawsuits after an accident occurs could come about if the features are labeled as a safety system rather than an assistance system.

For more information about active automotive safety and other related topics, follow the links on the next page.