by Kristen Hall-Geisler Jan 22, 2016
Fords new Drugged Driving Suit is designed to show drivers the dangers of driving under the influence of illegal drugs. The Ford Motor Company

Four states and the District of Columbia have legalized recreational marijuana, and another 19 states have legalized cannabis for medical use. For decades, we've heard over and over about the dangers of drunk driving, but the drugged driving campaigns haven't really gotten around to making many commercials yet. They totally will, though. Tomorrow.

“It's not just marijuana; it's also prescription drugs,” says Nolan Katerberg, the program manager of Ford Motor Company's Driving Skills for Life, in a phone interview. “It's a problem we've been noticing more and more in the past 10 to 15 years.”

Katerberg recently spent time at the North American International Auto Show in Detroit showing people how drugs impair our driving abilities using the Drugged Driving Suit designed by the Meyer-Hentschel Institute. These are the same people who previously invented suits that mimic old age and drunkenness. “People's first reaction is always ‘Wow,'” Katerberg said of the new suit. “They don't realize how very impaired they're going to be.”

That's because the Drugged Driving Suit mimics a cocktail of five drugs that would probably kill anyone but Hunter S. Thompson: marijuana, ecstasy, cocaine, heroin, and LSD. Unlike the Drunk Driving Suit, this one flashes lights to simulate visual interference and plays background music to simulate aural interference. Tremors are induced in the suit's gloves, and there are bandages at the neck, elbows and knees to impede movement. Course instructors also strap a 15- to 20-pound (6.8- to 9.1-kilogram) weight on one ankle and a 10-pound (4.5-kilogram) weight on the opposite wrist and ask the person in the suit to do a field sobriety test, including walking a straight line.

At the Detroit auto show, Katerberg had a basketball hoop set up for people to try while wearing the suit. Even something that simple proved nearly impossible under the influence of the Drugged Driving Suit. “It's quite impressive how messed up they get,” Katerberg says. “Some people were missing by a lot.”

The point isn't to amuse Katerberg during long days at auto shows, however. The Drugged Driving Suit is part of the free Ford Driving Skills for Life program, which focuses on newly licensed drivers in 29 countries. Instructors work on decision making skills behind the wheel with inexperienced drivers, including the decision to not drink or do drugs before driving — or text while they're behind the wheel. “Hopefully people get the message that any impaired driving is not acceptable,” Katerberg says.

NOW THAT’S COOL
Want to try out the Drugged Driving Suit for yourself? Visit the Driving Skills for Life website to find out when the tour might be near you. The events are free, and all you have to have is a driver’s license or a permit. But there’s more to the clinic than flailing around pretending to be a drugged-up freak taking a sobriety test — you’ll also learn to recognize road hazards, how to maintain a safe space between your car and the one ahead, proper (and emergency) braking and much more.

Pizza Nightmares: Can Your Diet Determine Your Dreams?

This Is Your Brain on Drugs 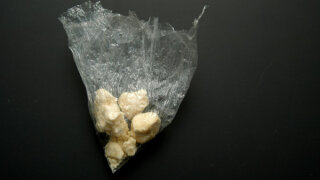 Stuff You Should Know Podcast: How Crack Works