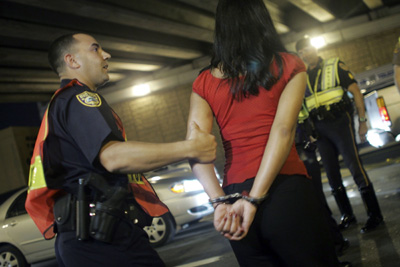 Police arrest a woman after she failed a field sobriety test at a DUI checkpoint.
Joe Raedle/Getty Images

There are many signs that police officers look for when deciding whether or not to pull someone over on suspicion of DUI. Erratic driving, weaving between lanes, going significantly above or below the speed limit, ignoring traffic lights and signs, straddling a lane and unexpected braking all may be symptoms of an intoxicated driver.

After pulling someone over, police officers use four methods to determine if someone is driving under the influence [ref]:

If a suspect fails any of the above tests, he or she is likely to be arrested.

Anyone suspected of DUI has the right to refuse to answer questions or to take a field sobriety test. If an officer asks a suspect to take a chemical test, the suspect must comply, or he or she will be arrested and could face stiffer consequences. However, as we will explain later, breath analyzers (commonly called breathalyzers) are in fact frequently inaccurate. A blood test is by far the most reliable chemical test, and in some cases, the suspect is offered a choice about which chemical test to take.

If someone is arrested for drunk driving, he or she may face more than just a DUI charge. Depending on the state laws, a suspect could face an additional charge for a high BAC. If the suspect was also involved in a car accident or a child was in the car, there could be charges of reckless driving or child endangerment.

After an arrest, the suspect will probably be released on bail with some sort of temporary license, but practices differ depending on the state and the particular incident. If you or someone you know has been charged with DUI, consult an attorney who specializes in DUI cases.