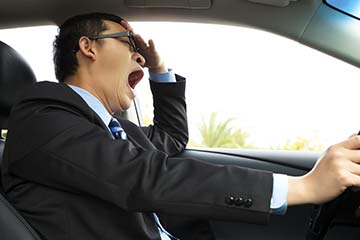 Is driving while sleep-deprived really as bad as driving drunk?
Tomwan112/iStock/Thinkstock

If you're looking for pure fun, most of us would choose being drunk over being sleep deprived. Being drunk usually involves a buzzy, happy feeling (if you're doing it right), while sleep deprivation -- in purely anecdotal experience -- often involves crying to your partner when tying your own shoes proves too difficult.

But of course, we're not really talking about what you want to do on a Saturday night. We're here to address the relative dangers of sleep deprivation or drunkenness, and let there be no mistake: Each one has some serious drawbacks.

Here's a short list of the problems with each condition: Sleep-deprived drivers cause one in five traffic accidents [source: Schiavo]. Alcohol is the third leading cause of lifestyle-related death in the U.S. [source: CDC]. Lack of sleep can cause memory loss, a weak immune system and even weight issues [source: CDC]. Alcohol use can cause myriad short-term problems -- as anyone who's ever turned 21 can tell you -- from injuries to alcohol poisoning to increased risky behavior. Beyond that, the long-term effects include cancer risk, as well as neurological, cardiovascular, psychological and social problems [source: CDC]. Which pretty much covers all the problems one would prefer to avoid.

To ask which is "better" or "worse" proves a little tricky, because while we have a multitude of evidence and research backing up the dangers of alcohol, we're just beginning to understand the complications of sleep deprivation. One criterion we can address is how both conditions cause impairment.

The research proves fascinating. One study from 2000 tested people on various tasks from spatial, reaction, cognitive, memory and perceptual categories. During one period of the testing, the subjects were given units of alcohol in intervals and asked to perform the same tests at various levels of intoxication. Unsurprisingly, they did worse the drunker they got. The tests were then repeated in intervals on the same subjects -- this time, sober but increasingly sleep-deprived. They found that at as early as 16 hours of wakefulness, subjects completed the test with the same level of accuracy as people with a 0.05 percent blood alcohol content. By 17 hours? The results were comparable to their 0.1 percent BAC results [source: Williamson].

In a similar study at Stanford, patients with sleep apnea (which causes sleep disruption and deprivation) were asked to perform similar tests to another group that had a blood alcohol content ranging from 0.057 percent to 0.083 percent. On all seven tests, the apnea patients scored worse than the 0.057 percent drinkers. On three tests, they scored worse than even the 0.083 percent drinkers [source: Powell].