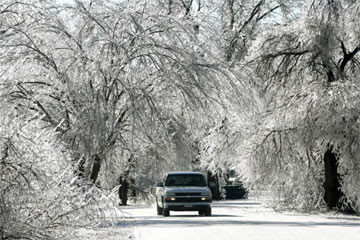 As winter rolls in and road conditions worsen across the country, most people prefer to curl up under a blanket and avoid driving if they can. For the drivers on "Ice Road Truckers," however, icy conditions mean big money. The History Channel television show follows these weather savvy drivers as they carry multiton truckloads across dangerous stretches of frozen lakes in Alaska and Canada, braving brutal weather and sleep deprivation in the process. While the drivers on the show have traveling on ice down to a science, most people have a harder time handling slick winter roads. In fact, icy roads contributed to nearly 500 U.S. fatalities in the winter of 2008-2009 alone [source: IcyRoadSafety.com].

Icy roads aren't just a problem in the northernmost states either. Midwestern and southern states only get snow a few times a year, but transportation departments in those states are less equipped to respond to icy road conditions. Since drivers in those states have less experience and preparation for winter driving, they find themselves at a high risk of getting in an accident whenever winter weather affects the roads. In fact, icy roads caused more fatalities in Indiana than any other state for the 2008-09 winter season, with states like Oklahoma and Texas also in the top 10 [source: IcyRoadSafety.com].

Fortunately, there are a number of different ways you can prepare yourself and your car to help safely navigate icy roads. In this article, we'll take a look at what makes driving on ice so dangerous, along with ways you can stay safe when road conditions take a turn for the worse. Read on to learn how good tires can help you get a grip on winter driving. 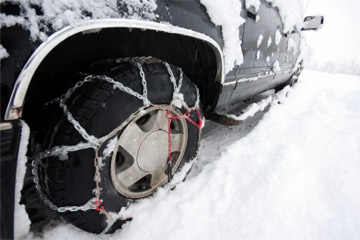 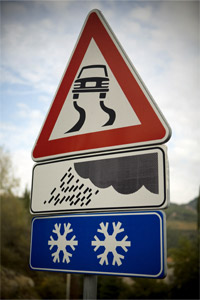 If you want to get technical, black ice should really be called "clear ice." Because black ice forms with very few air bubbles, it's virtually transparent and much harder to see than normal ice. Drivers usually mistake black ice for wet pavement, so they're often totally unprepared to react to the slippery conditions. One study found that driving on black ice was five times more dangerous than driving in normal conditions. Stopping on black ice takes nine times longer than normal [source: Adams]. Studded tires and snow chains can help you stop faster, but not by much.

Making matters worse, black ice can form when you least expect it. A snowfall may have melted days before, but the roads can still have patches of black ice waiting to send your car out of control. Black ice is more likely to cause problems in the mornings and at night when temperatures drop.

You should be particularly wary of driving over bridges and overpasses once freezing winter temperatures kick in, but black ice also can form on shaded sections of the road. Besides driving slowly and carefully, there's not much else you can do when you find yourself on black ice. If you're fortunate, the highway department will have treated the roads with salt or sand, but even then your car's stopping distance and handling will be impaired.

An Ounce of (Ice) Prevention

In certain parts of Minnesota, the state has installed an automated anti-icing system that automatically springs into action whenever conditions are right for black ice formation. The system consists of a tank to hold an anti-icing solution, along with nozzles embedded in the pavement and sensors that read weather conditions. Because the system prevents ice from adhering to the roads, it buys road crews time to further treat roads and keep drivers safe [source: Minnesota DOT].

Tips for Driving on Ice

The first step to becoming a safe driver in icy conditions starts before you put the key in the ignition. By checking and maintaining your car's safety systems, you can make sure you won't be caught unprepared once you hit the roads. Make sure your windshield wipers are functioning, and don't forget to check the level of your wiper fluid in the process. Test your front and rear defrosters as well; impaired visibility is the last thing you want when driving on ice. If your car's battery hasn't been replaced in years, you should consider getting a new one. Top off your antifreeze as well. If you're running low, you can damage your car's cooling system. Lastly, don't let the gas tank get below half empty in the winter.

After you've checked to make sure your car is in great running condition, take the time to stock up on some items that can prove useful in an emergency. Pack your car with items like jumper cables, an ice scraper, an emergency kit, a flashlight and fuel line de-icer. Sand or cat litter can be a lifesaver if you get stuck on icy roads. You may want to keep a bag of one or the other in your trunk during the winter and pour it under your tires to get some much-needed traction. Also consider keeping some blankets and snacks in your car in case you find yourself stranded for a little while. You don't want to add "cold" and "hungry" to your list of problems.

Once you've prepared your car for winter weather, keep these driving tips in mind to make your journey go smoothly. Use your car's lower gears on icy roads, particularly when you're going up hills. In addition, don't engage cruise control or overdrive on your car, since you'll be sacrificing control in the process.

If you do find yourself skidding on ice, don't make any drastic corrections or slam on the brakes. Instead, as we just discussed, gently steer into the direction of the skid and apply the gas once you've regained traction. If you're stuck, don't floor the gas in an attempt to power out of ice or snow; you'll only dig yourself deeper in the process. Instead, place cardboard, cat litter, sand or even your car's floor mats under the car's wheels and try to gently pull out of the slippery area. With a little patience, you should be back on your way in no time.

Cruise over to the next page for more related driving links.

The 'Dutch Reach' Prevents Bike Crashes
Are Lefties More of a Danger on the Road?
How Electronic Stability Control Works