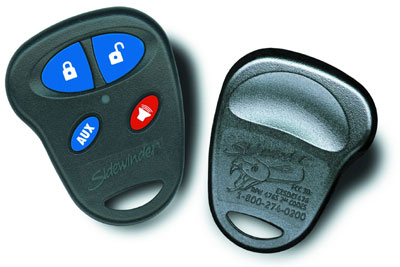 The keychain transmitter from the Sidewinder security system: The transmitter lets you lock the doors, arm and disarm the alarm and set off the siren from outside the car.
Photo courtesy Directed Electronics

­ M­ost car alarm systems come with some sort of portable keychain transmitter. With this device, you can send instructions to the brain to control the alarm system remotely. This works in basically the same way as radio-controlled toys. It uses radio-wave pulse modulation to send specific messages (to see how this works, check out How Radio Controlled Toys Work).

The primary purpose of the keychain transmitter is to give you a way to turn your alarm system on and off. After you've stepped out of your car and closed the door, you can arm the system with the touch of a button; when you return to the car, you can disarm it just as easily. In most systems, the brain will flash the lights and tap the horn when you arm and disarm your car. This lets you, and anyone in the area, know the alarm system is working.

This innovation has made car alarms a lot easier to use. Before remote transmitters, alarm systems acted on a delay mechanism. As with a home security system, you activated the alarm when you parked your car, and you had 30 seconds or so to get out and lock the doors. When you unlocked your car, you had the same amount of time to shut off the alarm once you got in. This system was highly problematic, as it gave thieves an opportunity to break into the car and disable the alarm before any siren sounded.

Remote transmitters also let you open your power door locks, turn on your lights and set off the alarm before you get into your car. Some systems give you even more control over the system's brain. These devices have a central computer and a built-in pager system. When an intruder disturbs your car, the central computer calls up your keychain pager and tells you which sensors were triggered. In the most advanced systems, you can communicate with the brain, signaling it to shut down the engine.

Since the transmitter controls your alarm system, the pattern of pulse modulation must act like a key. For a particular line of transmitter devices, there might be millions of different pulse codes. This makes the communication language for your alarm system unique, so other people can't gain access to your car using another transmitter.

This system is fairly effective, but not foolproof. If a determined criminal really wants to break into your car, he or she can use a code-grabber to make a copy of your "key." A code grabber is a radio receiver that is sensitive to your transmitter's signal. It receives the code and records it. If the thief intercepts your "disarm code," he or she can program another transmitter to exactly mimic your unique signal. With this copied key, the thief can completely bypass the alarm system the next time you leave your car unattended.

To address this problem, advanced alarm systems establish a new series of codes every time you activate the alarm. Using rolling code algorithms, the receiver encrypts the new disarm code and sends it to your transmitter. Since the transmitter only uses that disarm code once, any information intercepted by a code snatcher is worthless.

Since the early 1990s, car alarm systems have evolved a great deal, and they've become a lot more common. In the next 10 years, we are sure to see a new crop of technological advances in car alarms. Onboard GPS receivers have opened up a wide range of security possibilities. If the receiver were connected to the alarm-system brain, it could tell you and the police where your car is at all times. This way, even if somebody does bypass your alarm system, he or she won't have the car for long.

For more information on car alarms and related topics, check out the links below.