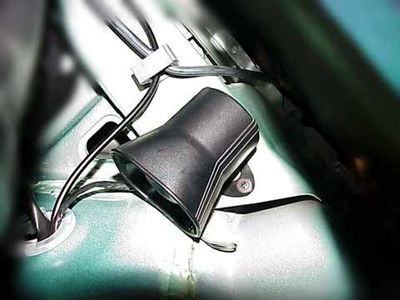 ­ In ­the previous sections, we looked at the various sensing devices that tell the alarm system's brain when something disturbs the car. No matter how advanced these systems are, the alarm system isn't much good if it doesn't set off an effective alarm. An alarm system must trigger some response that will deter thieves from stealing your car.

As we've seen, a lot of the devices that are already built into your car make for effective alarm signals. At the minimum, most car alarm systems will honk the horn and flash the headlights when a sensor indicates an intruder. They may also be wired to shut off the ignition starter, cut off the gas supply to the engine or disable the car by other means.

An advanced alarm system will also include a separate siren that produces a variety of piercing sounds. Making a lot of noise brings attention to the car thief, and many intruders will flee the scene as soon as the alarm blares. With some alarm systems, you can program a distinctive pattern of siren noises so you can distinguish the alarm on your car from other alarms.

A few alarm systems play a recorded message when somebody steps too close to your car. The main purpose of this is to let intruders know that you have an advanced alarm system before they try anything at all. Most likely, a veteran car thief will completely ignore these warnings, but to the opportunistic amateur thief, they can be a strong deterrent. In a sense, it gives the alarm system a commanding personality. On some unconscious level, it may seem like the car's not just a collection of individual parts, but an intelligent, armed machine.

A lot of alarm systems include a built-in radio receiver attached to the brain and a portable radio transmitter you can carry on your keychain. In the next section, we'll see what role these components play in a security setup.