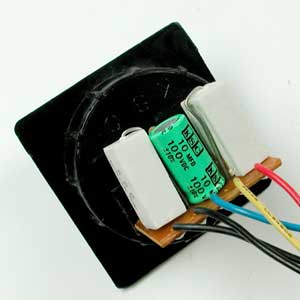 A typical crossover unit: Using a specific combination of inductors and capacitors, you can design a crossover unit that only conducts current that has the frequency of breaking glass.

­A lot of the time, car thieves who are in a hurry don't mess around with disabling locks to get into a car: They just bust a window. A fully equipped car alarm system has a device that senses this intrusion.

The most common glass-breakage detector is a simple microphone connected to the brain. Microphones measure variations in air-pressure fluctuation and convert this pattern into a fluctuating electrical current. Breaking glass has its own distinctive sound frequency (pattern of air-pressure fluctuations). The microphone converts this to an electrical current of that particular frequency, which it sends to the brain.

On its way to the brain, the current passes through a crossover, an electrical device that only conducts electricity of a certain frequency range. The crossover is configured so that it will only conduct current that has the frequency of breaking glass. In this way, only this specific sound will trigger the alarm, and all other sounds are ignored.

Another way to detect breaking glass, as well as somebody opening the door, is to measure the air pressure in the car. Even if there is no pressure differential between the inside and outside, the act of opening a door or forcing in a window pushes or pulls on the air in the car, creating a brief change in pressure.

You can detect fluctuations in air pressure with an ordinary loudspeaker driver. A loudspeaker has two major parts:

When you play music, an electric current flows back and forth through the electromagnet, which causes it to move in and out (see How Speakers Work to find out how this works). This pushes and pulls the attached cone, forming air-pressure fluctuations in the surrounding air. We hear these fluctuations as sound.

This is the basic mechanism of a speaker driver. A car's speakers make for effective alarm systems, as they can be used to measure variations in air pressure.

This same system can work in reverse, which is what happens in a basic pressure detector. Pressure fluctuations move the cone back and forth, which pushes and pulls the attached electromagnet. If you've read How Electromagnets Work, you know that moving an electromagnet in a surrounding natural magnetic field generates an electrical current. When the brain registers a significant current flowing from this device, it knows that something has caused a rapid pressure increase inside the car. This suggests that somebody has opened a door or window, or made a very loud noise.

Some alarm-system designs utilize the car's built-in stereo speakers as pressure sensors, but others have separate devices that are specifically designed for detection.

Pressure sensors, glass-breakage sensors and door sensors all do a pretty good job of detecting someone breaking into a car, but some thieves and vandals can do a lot of damage without ever making it inside. In the next section, we'll look at some security systems that keep tabs on what's going on outside your car.