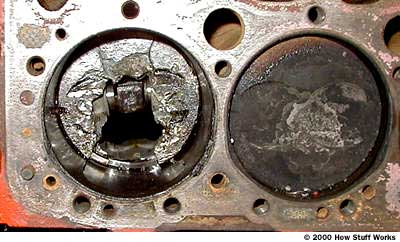 Damage from a piston striking a valve

This arrangement denotes an engine with one cam per head. So if it is an inline 4-cylinder or inline 6-cylinder engine, it will have one cam; if it is a V-6 or V-8, it will have two cams (one for each head).

On single and double overhead cam engines, the cams are driven by the crankshaft, via either a belt or chain called the timing belt or timing chain. These belts and chains need to be replaced or adjusted at regular intervals. If a timing belt breaks, the cam will stop spinning and the piston could hit the open valves.

The picture above shows what can happen when a piston hits an open valve.

The main reason to use double overhead cams is to allow for more intake and exhaust valves. More valves means that intake and exhaust gases can flow more freely because there are more openings for them to flow through. This increases the power of the engine.

The final configuration we'll go into in this article is the pushrod engine.

The cam actuates long rods that go up through the block and into the head to move the rockers. These long rods add mass to the system, which increases the load on the valve springs. This can limit the speed of pushrod engines; the overhead camshaft, which eliminates the pushrod from the system, is one of the engine technologies that made higher engine speeds possible.

The camshaft in a pushrod engine is often driven by gears or a short chain. Gear-drives are generally less prone to breakage than belt drives, which are often found in overhead cam engines.

A big thing in designing camshaft systems is varying the timing of each valve. We'll look into valve timing in the next section.