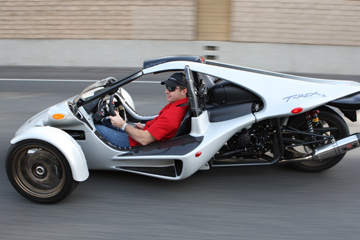 Can you really put a price tag on the unique rush the T-Rex offers?
Campagna Motors

It's visceral. It's special. It's only for the hardest of the hardcore. But with a current price tag of $54,000, is it the T-Rex the biggest bang for your buck?

At that price, a person could buy a base model Chevrolet Corvette ($48,930) and still have money left over to buy a new Kawasaki Ninja 500R motorcycle ($5,499). Both of these machines can provide you with incredible thrills and allow you to push the limits of your abilities -- and potentially lose your drivers' license, too. And for just a little more than the price of the T-Rex, you could get a brand-new BMW M3 Sedan ($55,000), another machine that offers mind-blowing power. If insane motorcycles are your thing, you could invest in a Ducati for the same price -- or even less if you search for the best deal.

The T-Rex also isn't the only performance three-wheeler on the market. The Can-Am Spyder is another example of a trike, and the driver sits upright and uses handlebars, making it essentially a three-wheel motorcycle. And while it's quick, the two-cylinder, 100 horsepower Can-Am Spyder simply doesn't offer the performance that the T-Rex does. But it also costs just half as much [source: BRP].

A better competitor to the T-Rex might be the Ariel Atom. The doorless, roofless two-seater is similar in that it's a frame, engine, and tires -- and not much else. Powered by a performance-tuned Honda four-cylinder engine, the Atom can do zero to 60 miles per hour (96.6 kilometers per hour) in less than three seconds. At about $50,000, it's similarly priced and probably a little easier to control than the T-Rex, since it has four tires [source: Ariel Atom].

But the T-Rex isn't only about numbers like zero-to-60 times or MSRP. It's about a driving experience that'll require all of your skills. It's about riding on three wheels when everyone else is on two or four. It's about the power of speed and throwing caution to the wind. But most of all, it's about having something no one else in your town probably has the guts to own.

For more information about the T-Rex and other three-wheeled cars, follow the links below.