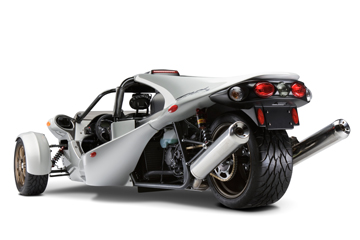 The T-Rex is a tadpole-shaped three-wheeler.
Campagna Motors

Before we go into the how and why of the T-Rex, we should learn a little bit about three-wheel vehicles and the unique dynamics they offer.

Three-wheeled vehicles have been around for a long time. In fact, the first modern car, the Benz Patent Motor Wagen, had only three wheels. Three-wheelers are usually smaller vehicles that are relatively inexpensive to buy and gas-thrifty at the same time. Some of the first three-wheel cars came after World War II, when the people of postwar Europe needed transportation without encumbering the cost of a car. Motorcycles were cheaper to license, and three-wheeled cars (also called trikes) fit the motorcycle definition. Many of these early models were powered by motorcycle engines, just like the T-Rex is today.

Three-wheel cars, regardless of the configuration, have several advantages over bikes and typical four-wheel cars. First, because they typically weigh very little, three-wheeled cars can house smaller engines for better fuel economy and lower overall fuel costs than typical passenger cars. Second, they sit upright on their own, so they offer more balance than motorcycles do. And lastly, they provide more driver protection than a motorcycle does. On the downside, they aren't quite as agile as motorcycles, and in some configurations (delta design), they aren't as stable as cars.

On the next page, we'll look at the T-Rex's chassis, and see how this three-wheeled, motorcycle go-kart hybrid is born.