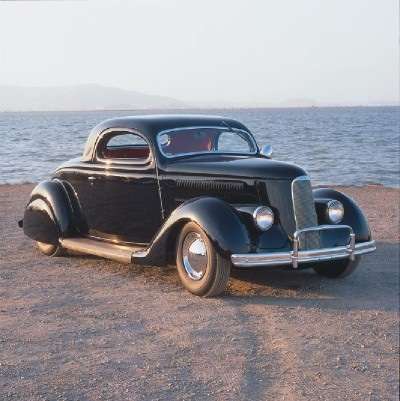 Before creating the Calori Coupe, Jack Calori started out as a hot rodder. He built and raced four 1932 Ford roadsters and acquired a 1929 Ford roadster that would become one of the most famous lakes racers of the day.

Calori's cars could be distinguished from most hot rods of the time by their level of detail and finish. Each car was beautifully painted and upholstered, and the engines were polished and chromed. In addition, they were very competitive on the lakes, a fact to which his collection of timing tags can attest.

Jack bought a 1936 Ford coupe in 1947 from the original owner to replace the 1929 roadster as a daily driver and, in fact, become the 1929's tow car. Jack's friend, body man Herb Reneau, who was responsible for the work on the 1929, saw the car's potential.

While stored in his garage, Herb cut off the top without warning. Fortun­ately, Jack succumbed to the "kustom" allure, and he and Herb went on to build one of history's most stunning 1936 Ford ­customs.

Jack severely stepped the rear of the frame and installed a dropped axle at the front to achieve the right stance, while Herb chopped the top three inches, and added a 1939 LaSalle grille, a clamshell hood, skirts, and 1940 Chevy headlights.

The interior of the Calori Coupe was impeccably finished with roll-and-pleat upholstery and contrasting white trim.

The bumpers came from a 1941 Ford, and the taillights originated on a 1941 Hudson. The car is undeniably similar to the Westergard style, but Calori claims he had never heard of Harry Westergard when he and Herb built the car.

Jack didn't give up his hot rodding roots entirely. When he sold his 1929, he kept the engine and installed it in the 1936. The engine, a 59AB Mercury, was bored and stroked 1/8 inch each way, then given a Clay Smith cam, a Lincoln distributor, Eddie Meyer heads, and a Weiand intake.

The oil pan, dipstick tube, water pumps, generator case, and oil filler/breather were all chromed, and the heads and intake were polished.

When installed in the 1929, the engine had earned Jack no less than a third-place finish at every lakes event in which he competed. Calori tested the engine in the coupe too, running 114.5 mph in a Russetta Timing Association run.

The famed Calori Coupe inspired many an imitator after appearing on the cover of Hot Rod in 1949.

The problem with putting the "hot" motor in his custom car, however, was cooling. There was no room for a fan, and the LaSalle grille didn't allow for much airflow.

After adding a scoop under the front bumper, punching louvers in the hood, and adding water capacity to the radiator tank, the car still wouldn't cool properly.

Much of the car's fame is a result of its appearance on the cover of the November 1949 issue of Hot Rod. Tom Medley spotted the car on the street and arranged an impromptu photo shoot. This exposure inspired many imitators, and earned the coupe a spot in custom history.

Jack traded the coupe in 1950 for a new Mercury. Roger Domini later found it in Washington and owned it for many years.

In 2003, Jorge Zaragoza purchased the car and had Roy Brizio Street Rods restore it for the first-ever custom class at Pebble Beach in 2005.

There, it won both best in class and the Dean Bachelor award. Soon thereafter, the car went on display at the Peterson Automotive Museum as a living piece of the early days of custom cars.