1959 Cadillac Cyclone Ushers Out an Era 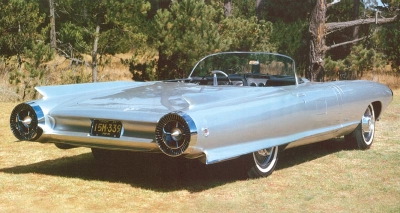 Taillights were another detail included in the redesign of the 1959 Cadillac Cycone. They moved from the deeply concave rear panel to the round bumper pods that gave the car its rocket-ship look.
David Durochik

Several of the features on the 1959 Cadillac Cyclone would have made it impractical for daily use, the main one being the plexiglass bubble-top. This one-piece canopy was originally vacuum silvered on the inside to reduce glare and heat, but the silver soon peeled off and was not replaced.

There were no windows to roll down, so small rectangular openings in the doors were provided to act as pass-throughs. A sound system broadcast the voices of the car's occupants through speakers hidden in grilles on the front fender tops. When the doors were opened, electric motors raised the canopy a few feet to allow entry or exit-providing all the relays and switches were in the mood to cooperate.

To put the top down and stow it, the entire rear section of the car was released by a cable hidden behind the driver-side gas filler door and manually tilted back out of the way so the canopy could flip over into the rear compartment. The doors opened manually by being pulled back along the rear quarter panels, but the process began with a power assist that first pushed the doors three inches out from the body.

Dream cars, being a combination of what might reasonably be expected on production cars in the next few years mixed with some far-out and futuristic concepts, were promoted and coveted by directors of design as an extension of their own abilities and position.

A number of the Cyclone's features were unfinished as Harley Earl was retiring, but Bill Mitchell, who was moving into the number-one spot at the Design Center, had an agenda of his own, and it didn't necessarily include the Cadillac Cyclone. The flamboyant "space age" would be over, as his preference for a smoother, more conservative look was expressed in the reduced and refined fins of the 1960 GM cars.

The Cadillac Cyclone's fins were cut down in keeping with the trend, the taillights were moved to the bumper ends, and the hubcaps were changed. This briefly extended the usefulness of the car for publicity purposes, but its days were numbered.

McLay remembers being asked to drive the car from Detroit to Flint, Michigan, for a display after the air-ride system had been replaced by coil springs. He soon discovered that no shock absorbers had been fitted to it, and when he returned from this more-than-bouncy trip, he was told that no more money was to be spent on the car. We can read between the lines that Mitchell was going forward with his own ideas and that it was time for Harley Earl's last dream car to be retired to storage.

Fortunately, the Cyclone and a number of other important cars were saved and stored by General Motors. With the renewed interest in this chapter of automotive history, they remain available for display. The Cyclone's fins are cut down, the vacuum silver has long since peeled off of the canopy, and its original pearl white paint has been changed to silver.

But at least it survives to give us a look at that brief moment in the late 1950s when Buck Rogers space-age design bounced off Detroit drawing boards with an outrageous and futuristic look that, although short-lived, was a definite milestone in the evolution of the automobile.