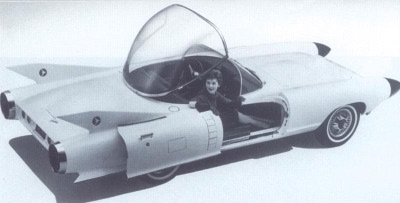 With its rocket-tube bodywork, soaring blade fins, and pop-up "bubble" canopy for a roof, this dream car embodied all the late-1950s mythology of the budding space age.
David Durochik

One reason for Harley Earl's success was his use of clay models to make a visual presentation of his ideas, rather than flat drawings and sketches used by most others. As a natural outgrowth of this, it occurred to him that a tangible embodiment of ideas, a sort of "dream car," would not only be fun to drive around in, but could measure public opinion and give stature to his department. This was the first step in the creation of the 1959 Cadillac Cyclone dream car.

Packard's design chief, Ed Macauley, drove a futuristic boat-tailed speedster that was continually updated throughout this period. Earl may have felt it was time for him to make a statement of his own. His career was on the move, General Motors was on the move, and in the close-knit fraternity of automotive Detroit, what you drove up in showed that you had arrived in more ways than one.

So, in 1938, his first dream car-known as the Y-Job-was unveiled. Built as a two-place convertible on a Buick chassis, it predicted many features that would be found on Buicks of the future. From this simple beginning, a dream car program involving all General Motors makes eventually developed. A GM press release from 1965 summed up the role of these specials thusly:

"Many of the styling improvements on General Motors cars through the years might never have left the design studios without the auto industry's unique periscope on its own future-the 'dream car.' Born in 1938 to give the stylist a tool for advanced research comparable to the laboratory and proving ground used by the scientist and engineer, the dream car has become a world famous symbol of the American public's ever growing fascination with the life it can expect in the future. The dream car has been more than a gleaming car on a pedestal; it has allowed input of public opinion on what is wanted on future cars, and has made possible better looking, more advanced cars than might have been produced in normal evolution."

Soon enough after the Y-Job's arrival, the grim claw of world war came to include the United States in its grip and the auto industry's attention was diverted to the production of armaments. It wouldn't be until 1951 that GM would next peer into the future with two more dream cars, the LeSabre and the Buick XP-300.

A parallel development to this return to idea cars was the rise of the Motorama, GM's series of spectacular car shows held in select cities intermittently between 1949 and 1961. The Motoramas became great forums for dangling dazzling concepts before the car-buying public.

Dream cars became an eagerly anticipated part of the show. (The 1954 Motorama alone exhibited 12 special show cars.) Among the stars of the 1959 edition was the Cadillac Cyclone. Consider once again the 1965 GM press release:

"It would be impossible to guess the total number of people who have viewed the three dozen dream and experimental cars created thus far by General Motors . . . . In addition [to the Motoramas], some of the cars are still being shown individually in local shows and fairs, both here and abroad. Others are now running on test tracks. The myriad of styling and engineering features on current GM production cars has put yesterday's dream car into the hands of today's average motorist. And just as it has spearheaded progress in the past, the dream, car will continue to search the future for automotive improvements symbolizing the limitless imagination and creativity of the stylists and engineers of the auto industry."

For more information on the 1959 Cadillac Cyclone classic car, continue on to the next page.