Is it possible to lease a used car? 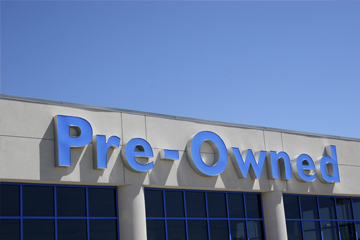 If a dealership is loaded with good quality, late-model trade-ins, it might inspire the manufacturer’s financing division to offer used-car leases for a limited time.
fstop123/Getty Images

It's possible to lease a used car, but the opportunities come and go. They are most common when new-car sales are hitting a peak, because that's when dealerships are taking in the most trades. If all the dealerships for a manufacturer have lots loaded with good, late-model trade-ins, it might inspire the manufacturer's financing division to offer used-car leases for a limited time. It's a good way to move extra inventory off the lots, especially if the used cars in question would otherwise demand high prices.

Here's how this works. A shopper walks onto the dealership lot to check out the used cars but notices that the inventory is priced high. And they know they don't want a new car. If the salesperson can offer a lease on one of those used cars and get the shopper into a more expensive car than he or she would otherwise have wanted (or been able to afford), everyone's happy.

When it's available, used-car leasing works pretty much the same as new-car leasing. The customer and salesperson agree to the lease terms (which include rules such as limitations on mileage), and the customer makes payments for the duration of the lease. When the lease is up, the customer returns the car or buys it for an amount determined during the original negotiation.

Of course, the car is probably five or more years old at this point, and the actual value could be significantly different from what was projected. If the customer's buyout cost is lower than the car's fair market value, it could be a great deal. Otherwise, it's probably best for the customer to walk away at that point.

Used-car leasing might help people get into nicer used cars, at least temporarily, but it does sacrifice one of the most appealing benefits of leasing a new car. During the lease period for a new car, regular maintenance is usually included, and the manufacturer's warranty kicks in to cover any other issues. With a used-car lease, however, dealerships probably won't cover maintenance, and the original warranty period might be over. That means that someone who leases a used car might end up spending money out-of-pocket on maintenance and repairs [source: Consumer Reports]. Basically, leasing a used car could mean spending money at the dealership to repair a car that ultimately belongs to the dealer.