Is it smarter to buy or lease a car?

Browse the article Is it smarter to buy or lease a car? 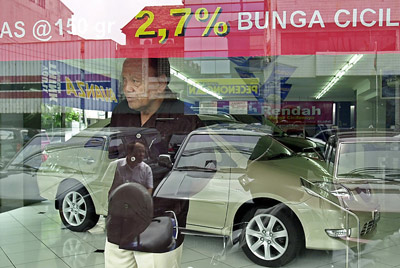 ­It happens ­all the time. You see an ad on television for an amazing car you've always wanted, and the monthly payments shown are actually within your financial grasp. Visions of all the dates you'll be able to manage in such a hot vehicle dance in your head. You've had a look at the candidates, selected your future spouse and even chosen the neighborhood where you'll settle down together. Then, like a bullet to your heart, the announcer says the magic phrase -- the one that kills your dreams and brings you out of your reverie and back to reality. The price, it turns out, is "an attractive lease offer."

­What is it about leasing a car that some find so "unattractive"? The payments are cheaper, you can get a new car every few years, and a lease is often easier to get than financing for an auto loan. So why doesn't everyone lease? Is it smarter to lease a car or buy one?­

Phillip Reed, a consumer advice editor at Edmunds -- an auto analyst resource -- points out that the age-old decision between leasing and buying isn't actually the difference in finances. Instead, Reed says, it's a lifestyle choice. People who like to drive a new car every few years simply find a lease more appealing, and since the individual payments are less expensive than purchasing a car, lessees are usually able to drive nicer cars than they could afford to buy outright.

­­Leases have several aspects that make them good choices over buying a new car -- like the fact that up-front out-of-pocket expenses are generally lower. For example, the down payment is usually low, and sometimes nonexistent. Monthly payments, too, are much lower than loan payments, and leases are often easier to obtain than a loan. What's more, maintenance costs are next to nothing, since most warranties for new cars last three years -- which is usually around the same amount of time as the average lease period. Edmunds, by the way, recommends three-year leases as the ones that make the most financial sense for the lessee -- the person leasing the car.

But there are also extra expenses with a lease. Insurance rates are usually higher for leased vehicles since lease coverage may include gap insurance -- which pays off what is still owed on the lease in the event the car is totaled. And, since you turn in your car every three years, if you lease a car that requires a down payment, that expense will come out of your pocket each time you get a new lease. Each time you turn in your old car for a new one, there are added fees. When a car is driven, it depreciates -- reduces in value. When you buy a car, the depreciation is your burden as the car owner; it's reflected in the price you can resell your car for later on. With a lease, the dealer is the one who accepts the depreciation, since he or she will take back the leased car.

Or at least, that's the way it seems. In reality, the costs of depreciation are factored into the monthly lease payments you'll make. If the dealer determines that your car has more than normal wear and tear on it, you'll be charged extra fees for repairs. Mileage, too, adds to the cost of a lease when you turn in the car. Most three-year leases allow for 36,000 to 45,000 miles over the life of the lease. Extra fees of anywhere from 5 to 20 cents per mile can really add up. Say you drive 3,000 miles more per year than your lease allows, and you're charged 20 cents per mile. When you turn your car in for a new lease, you'll have to pay an extra $1,800 on top of any fees you have to pay to begin the next lease.

To examine the real costs of buying versus leasing a car, you have to take into account the life of the car. Read the next page to find out about the dollar values of leases and purchases.

The Real Costs of Owning or Leasing 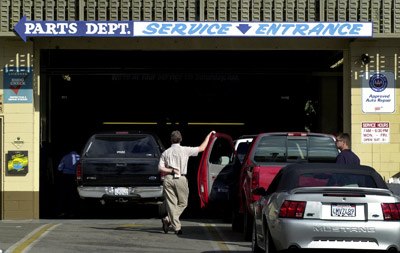 Maintenance for your car is part of the real cost associated with it. For leases, it's generally low, for ownership the maintenance costs increase over time.
David McNew/Newsmakers

When deciding to lease or buy a new car from a purely financial perspective, you should look at the cost of driving the car over a period of several years. There are real costs that come along with a car. Maintenance, insurance, taxes, down payments and monthly payments all add to the car's total cost, which exceeds the dealer's asking price. Let's look at the real costs of a leased car and a purchased car.

Edmunds evaluated the costs of car ownership versus leasing, based on a new $20,000 car financed with a three-year loan or lease at 6 percent interest. What they found was that, after a five-year period, the real cost of owning a car was actually slightly higher than leasing. With monthly payments, down payments, maintenance, insurance, taxes, state fees and interest, the total cost of ownership came to $32,388 for five years. Under the same circumstances, the cost for leasing cars during a five-year period totaled $32,140.

Initially, it seems that leasing is a more affordable way to go. Especially if you become a seasoned lessee, who can avoid the extra fees and penalties, such as for extra mileage. But you must also take into account what happens after this five-year window. Very few people drive a car for only five years; if that were the norm, then leasing would be the way to go. So let's look at the 10-year life span of a car, using the same scenario that Edmunds provided.

When you lease, you begin again every three years: You make a down payment if necessary, you pay high insurance rates, low maintenance costs and you get the hassle-free experience of simply turning in your old car and picking up the keys for your new one. But leasing a car doesn't build equity like owning a car does.

After 10 years of owning a car, your insurance will decrease, your maintenance costs will increase, and you will have finished off the largest financial burden -- the monthly payment -- years ago. With a lease, you continue to make monthly and down payments, though the rest of the costs remain about the same. But when you add up all of the money you've spent over the last 10 years, you see a clear advantage of purchasing a car over leasing cars.

After 10 years, the new car you purchased will have depreciated a great amount. But it should still be worth a portion of its original value. For example, in 1998, a Toyota Camry LE went for about $21,000 [source: South Carolina Administrative Law Court]. In 2007, that same car in excellent condition was worth $4,075 as a trade-in [source: Kelley Blue Book]. You can use that trade-in amount as a down payment that will defray the cost of the next car's total cost and lower the monthly payments. So, after 10 years, the trade-in value of the car subtracted from the cost of owning the car for the past 10 years could bring the car's total cost down to less than $30,000.

For more information on cars, finances and related topics, visit the next page.