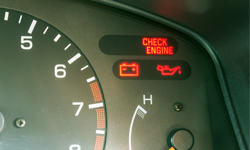 Warning lights should be an immediate tip-off that the car has some secrets left to be told.
amstockphoto/Thinkstock

We've all driven around for a week or two with the check engine light on in our car. After all, if the car is running it's easy to overlook a light on the dashboard. And, sometimes those lights do come on because of a bad sensor or because we didn't tighten the gas cap enough.

Still, if you're looking to buy a used car that has a dashboard that looks like a Christmas tree, that's enough of a red flag that you should reconsider. Sure, the lights could be on for a minor reason (again, that tricky gas cap), but they also could be on because of a bigger problem. If you really love the car, a trusty inspection from an independent mechanic can tell you if those lights are something to be concerned about.

Another tell of a possibly flood-damaged car is when the carpet doesn't match the drapes. Unscrupulous sellers will sometimes replace a car's carpet to get rid of the stinky tipoff that the car was flooded. While new carpet could be a plus in a used car, it's not something most owners typically replace, so if you see it, be sure to grill the seller about it. There are other ways to check for flood damage, like a water line in the engine bay. A car that has been totaled due to flood damage should also have this fact noted on its title. Even if you can't tell for sure that a car has been in a flood, if you suspect that it has, it's best to just float on by and find a better one.

Anyone who is selling a car wants to show it in its best light, but buyers should beware of a seller that tries to control every aspect of a test drive — or one that doesn't consent to a test drive. On a used car test drive you should put the car through its paces. Drive it in a number of different situations (merging on the highway, highway speeds, stop and go traffic) and on a number of different roads so you know what it's like to live with. Beware of sellers that try to control the route or prevent you from using certain systems — the radio, air conditioner or heater — during your test drive. They might be hiding a serious flaw with the car.

Getting a prospective new car checked out by an independent mechanic is just good sense. While you'll spend money ($150 or so) on the inspection, avoiding a used car lemon is more than worth it. Any upstanding used car seller should consent to having the car inspected by someone you choose. If the seller refuses to let you have the car inspected or insists you use their mechanic find someone else to buy from. Having a car inspected is a routine part of buying a used car, so sellers who refuse it may not be on the level. That's a deal you can feel good about walking away from.