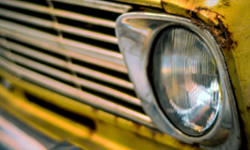 Rusting is one of those issues that fundamentally ruins a car.
mrdoomits/Thinkstock

Buying a used car is a smart financial decision. In short, you get a car for less money than buying new. What you trade savings for, however, is the protection a new car offers. New cars come with protection because ... well ... they're new. No one's messed with them, their parts haven't worn out yet and nothing's happened to them.

Used cars, on the other hand, have histories. And while most used cars are fine, there are a number of issues used cars can have that make buying them a waste of your hard-earned cash, instead of a smart financial choice. Luckily, there are some pretty clear signs of when you should walk away from a used car.

Almost anything on a car can be fixed or replaced. The question is, should it be? When it comes to excessive rust, the answer is often no. While rusted out body panels can be replaced, it's expensive and time consuming. Rust on the frame means that the frame —the very bedrock of the car — is rotting away. Replacing a car's frame, even if you just replace part of it, is expensive and runs the risk of weakening the car overall. While some rust is to be expected on a used car, look out for excessive rust with bits of metal flaking off, and avoid cars with rust in key areas. Let's put it this way: some rust on the floor pan is OK, but if Fred Flintstone could drive the car, you're better off walking away.

9: Funk in the Trunk

Buying a stinky car seems like a bad idea from an olfactory perspective, but a trunk with a set-in funk can also be a sign of larger issues. Avoid used cars with musty, moldy or mildew-y interiors as this is a sign of possible flood damage. When a car suffers flood damage, most insurance companies consider it a total loss because the water damages almost every system, from mechanical to electrical to even — you smelled it — the carpet. Trying to fix a flood-damaged car will quickly eat up any money you saved when you bought it.

A freshly-painted accent wall in your living room is a good idea. On a car, however, you want all the paint colors to match, and fresh paint isn't always a selling point. Like new or mismatched carpet, new or mismatched paint is an indicator that repairs have been made, which could mean that the car was in an accident. While some accident damage can be repaired, other accident damage can make owning that car a headache and a seller that's trying to camouflage accident damage is not someone who you want to deal with. Take a close look at any used car with fresh paint or paint that isn't quite the same on all the body panels of the car.