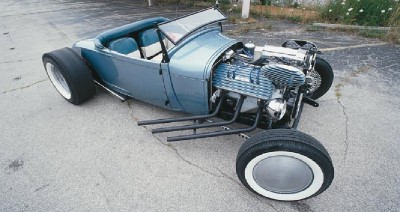 The Burk Roadster hot rod, built by Dave Burk of Glen Ellyn, Illinois, illustrates one of the most impressive traits shared by hot rodders: the ability to build their cars themselves. "Checkbook rodders" certainly do exist, but the do-it-yourself-attitude that permeated the hobby in its early days continues. The Burk Roadster is proof that the self-sufficient rodder is alive and well.

Dave acquired fabrication skills during the ten years he worked as a mold maker for a now-defunct die manufacturer. There, he learned how to operate lathes, mills, and eventually a CNC machine. With access to these tools, Dave set out to build this '28 Ford Model A roadster in 1993. He completed the project in only four months.

Dave had been a hot rod fanatic since childhood, when he saw a Model A filled with nitroglycerine blow up the monster in the 1959 movie The Giant Gila Monster. Inspired by that car, he set out to build a rod with the stripped-down look of a dual-purpose '50s drag/street car.

The project couldn't begin until Dave had the right parts. After acquiring a $100 1950 Ford pickup flathead and a ­gennie Latham Axial Flow supercharger (the culmination of a 12-year search), Dave started by rebuilding the engine. He installed an Isky cam, a Vertex magneto, and several parts he machined from billet alumi­num, including the intake manifold and all of the pulleys and brackets.

Dave Burk rebuilt the engine and installed an Isky cam and a Vertex magneto.

A boxed aftermarket Model A frame accepted the flathead, which Dave hooked to a 1937 Ford transmission. Again, Dave fabricated most of the suspension parts.

To lower the car, he mounted the rear axle on top of the frame instead of below it and the front leaf spring behind the axle, not above it. Channeling the steel '28 Ford body dropped it another four inches. With Sprint Car rear wheels on vintage-style slicks, the car sits so low that Dave welded the doors shut; he just hops in. In keeping with the bare-bones look, Dave moved the radiator to the trunk, which required routing all four hoses underneath the car, next to the frame.

A sparse interior completed the project. Dave outfitted it with pressboard door and dash panels covered with pleated vinyl, a three-foot-long shift rod replete with a hand-carved skull, and a pair of boat seats that he had a friend cover with vinyl. Rubber mats cover the floor, the transmission and torque tube are exposed between the seats, and the only two gauges (oil and temperature) reside below the simple, smooth dash panel.

The interior of the Burk roadster was outfitted with a pressboard door and dash panels covered with pleated vinyl.
Publications International, Ltd.

Dave has made a few changes since he put the car on the road in 1993. The primered body gave way to a 1959 Chevy Crown Sapphire paint job in '94, and the beautiful, one-off heads were added in '95 after Dave had learned how to use a CNC machine. Dave designed the heads for a 7.5:1 compression ratio, perfect for the Latham blower. He programmed the CNC machine to cut them from billet aluminum, adding his name to the surface. Dave says the flattie puts out 275-300 horsepower.

Today, Dave works to make sure a future generation of ­rodders will know how to build rods too, as an admissions ­representative for Wyoming Technical Institute. Located in Laramie, Wyoming, the Institute offers 9-12 month programs that teach rod, custom, and high-performance engine and chassis construction techni­ques. If the students he recruits can build anything approaching his Model A, the future of hot rodding is in excellent hands.