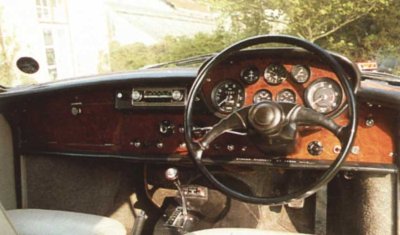 Bristol's 410 was mainly a plusher 409, improving slightly on a proven design.

Bristol Cars adhered to its remarkable (for a low-volume producer) two-year model-change cycle of the late 1960s by transforming the 409 into the Bristol 410. Though very closely related to its predecessor, this new Bristol was superior in several ways.

Air conditioning became available -- but not standard equipment -- at last, paint was switched from enamel to acrylic, and controls for the Chrysler TorqueFlite automatic transmission were switched from the American company's infamous pushbuttons to a conventional floor-mount quadrant.

The Bristol 410's stodgy styling was offset by GT performance and careful craftsmanship.

The Bristol 410 received no major styling or mechanical changes except for an important update to the Girling all-disc hydraulic brake system: new "fail-safe" twin independent circuits. Top speed remained 130 mph, which seemed quite adequate for the more mature buyers attracted to -- and able to afford -- this car.

Though not initially publicized, the Bristol 410 handled significantly better than the 409, as suspension was modified in every detail, from bushings to shock-absorber rates, to take advantage of the superior capabilities of modern radial tires. Another factor was undoubtedly the switch from 16- to 15-inch-diameter wheels, which lowered the center of gravity for crisper, flatter cornering.

As ever, this Bristol was built strictly to order, but Bristol 410 demand was apparently as solid as that of earlier models. The firm again completed some 300 cars in two years before moving on to its next offering, the 411.