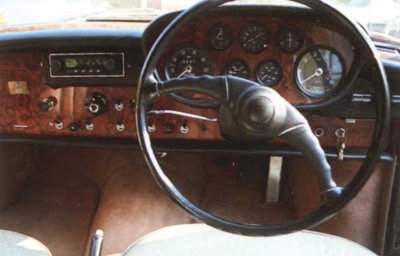 Continuing its 1960s policy of fairly frequent model changes, Bristol dropped the 408 after only two years in favor of the new Bristol 409. This was a more ambitious update than the previous one, though it bore few alterations to styling or equipment.

The same could be said of the chassis: still the proven, 114-inch-wheelbase box-section platform design with wishbone-and-coil-spring independent front suspension and a well-located Salisbury live rear axle on torsion bars. What warranted the new model number was a Canadian Chrysler V-8 enlarged by a mere 5 cubic inches and sporting the same nominal power ratings as the previous 313-cid version.

Still, there must have been some "hidden" gains in power and torque since 1961 (or perhaps the latest styling was more aerodynamic) for top speed was now up by 8 mph, to 130 mph, and 0-60 mph acceleration was quicker by 1.1 seconds.

More significant, the revised powerplant was mounted further back in the chassis, which improved fore/aft weight distribution. So did a light-alloy case for the TorqueFlite transmission (replacing cast iron), which contributed to a modest 60-pound reduction in curb weight. Also new was a second-gear hold feature, allowing the driver to delay the automatic upshift into third for faster standing-start pickup.

At the same time, suspension was softened with lower spring rates, though geometry was adjusted to minimize negative effects on handling. There was also a change in the braking department: still four-wheel discs but supplied by Girling rather than Dunlop. Reason? Dunlop was closing out its brake business and Girling was taking it over.

Like earlier Bristols, first-year Bristol 409s were available only with manual steering, but optional ZF power assist became available in late 1966 and it appreciably changed the car's character. Of course, refinement had been steadily improving over the years, but this latest Bristol was more civilized and "gentlemanly" than even its most recent forebears -- equally at home charging down a fast highway or slipping quietly through the urban jungle. The successor Type 410 and 411 models would take this trend several steps further.