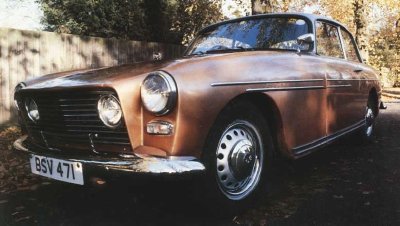 The Bristol 408's standard adjustable shock absorbers was the only chassis alteration from the 407.

The Bristol 408 arrived during a time of change for Bristol. With the V-8-powered 407, Bristol Cars began a period of rapid change, not just in technical specifications but styling and model turnover. Bristol had issued just seven models in the 16 years before 1963, but would go through five in the following eight years, including the Bristol 408.

Though basically a warmed-over 407, the Bristol 408 that was introduced in 1963 was sufficiently changed to justify a new type number. Most of the alterations involved body design, basically the 407 outline with a more squared-up nose and flatter hood and roof.

The most noteworthy mechanical change was adoption of adjustable Armstrong telescopic shock absorbers at the rear, thus enabling the driver to compensate for heavy loads in the trunk and resulting fore/aft attitude changes. Other chassis specs and running gear were as before, though the last few of the 300-odd cars built carried the successor 409 model's drivetrain.

A squared-up front distinguished Bristol's 408 from the previous 407.

While the giant American automakers would consider frequent running changes in a low-volume model as suicidally incompetent, Bristol Cars, like other contemporary European specialist producers, built its products mostly by hand and had very little tooling to amortize over a longer production run. Thus, even fairly frequent running changes were not only possible but economic.

Besides, Bristols had always sold on the basis of exclusivity, and customers for "bespoke" cars such as this liked to feel that improvements were always being made. Call it snob appeal or one-upmanship, but the fact is that many buyers enjoyed being able to point out the subtleties of the latest model to friends, never mind that further changes might soon render it "yesterday's" model.

It's also true of handbuilt cars that no two are ever completely alike, which enhances the aura of exclusivity as much as limited production. And when you're paying upwards of $12,000 for a car, which is what the Bristol 408 cost new -- a lot of money in '63 -- it's nice to feel you're getting something unique. Bristol buyers did and still do, one reason the firm survives today.