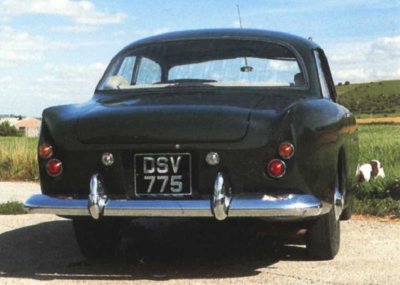 The updated Bristol 406 was the first square-rigged Bristol and the last with six-cylinder power. All-disc brakes were laudable for the day.

After five years of attempting to "divide and conquer" with the split-wheelbase 404/405 arrangement, Bristol returned to a single long-chassis coupe in 1958, albeit ­with more contemporary styling. In fact, the new Bristol 406 was the first Bristol that looked like it had been designed by an automaker instead of an aircraftmaker.

This was a transition model in many ways, which gives it minor historical distinction. On one hand, the Bristol 406 set the style pattern for future models well into the Seventies, yet was the last Bristol to use the aging "cross-pushrod" six inherited from BMW, and the only six-cylinder Bristol with more than 2.0-liter displacement.

Steadily rising weight (now at 3010 pounds versus 2670 for the 401) and its negative effect on performance was behind the engine size increase. This was accomplished by stretching both bore and stroke (from 66 × 96 to 69 × 100 mm) for a total 2216 cubic centimeters versus the previous 1971. Even so, rated horsepower was unchanged, though torque improved and peaked 500 rpm lower for a small gain in mid-range performance. As on the 405, drive was to the rear wheels through a 4-speed manual gearbox with electric overdrive.

Predictably, the Bristol 406 chassis was much like that of previous Bristols, with the same 114-inch wheelbase and curious wishbone/transverse-leaf independent front suspension. But signs of progress were evident elsewhere. Track widened by two inches front and rear, and there was a new rear axle located laterally by a more modern Watt linkage instead of the previous A-bracket, with single forward-facing torque arms to handle fore/aft loads. Springing remained by longitudinal torsion bars. An important safety item new to Bristol was four-wheel disc brakes, big 11.25-inch-diameter Dunlop units.

Some Bristol partisans were horrified by the new Bristol 406 styling, though others muttered that it was overdue. It was far from pretty -- especially the gaping "bigmouth" front -- but at least the angular notchback body wasn't stuffy, and Bristol would get around to cleaning up details. The bodies themselves, now supplied by a London builder, employed steel inner panels overlaid with aluminum skins.

The Bristol 406 was heavier still than any previous model, and even its larger engine struggled to perform under the body's cumbersome weight.

The Bristol 406 was less slippery than the 405 but made up for it by being considerably roomier despite riding the traditional Bristol wheelbase. For example, it stood 2.5 inches taller for a consequent gain in headroom, especially noticeable in the rear.

It was also quite a bit longer -- by over a foot, in fact -- most of it apparently in the front fenders. Still, this only made it easier to retain one of the 404's more novel features: a spare tire neatly hidden in the left front fender; a similar compartment in the right fender housed battery, brake servo unit, and windshield washer-fluid reservoir.

Perhaps the Bristol had grown too large. The Bristol 406 was certainly still too heavy despite its larger engine. But Bristol had an answer to the performance problem -- an expensive one -- in the form of six lightweight Zagato-bodied specials endowed with tuned 130-bhp engines.

With the extra muscle and 540 pounds less weight than the standard Bristol 406, they could reach 125 mph (versus only 105), though their four-seat coupe bodywork looked as bizarre as anything this Italian studio ever did. If you run across one of these today, consider it a miracle.

As for the standard issue, the critics were right. Though its handling, steering, and ride were all quite impeccable, the Bristol 406 had to be rowed along with the gearlever for maximum performance -- which wasn't all that "max."

Still, the addition of disc brakes and the new rear suspension meant the aging Bristol chassis could now handle a lot more power. The only questions were, would Bristol provide it, and if so, when? The answers were yes and 1961.