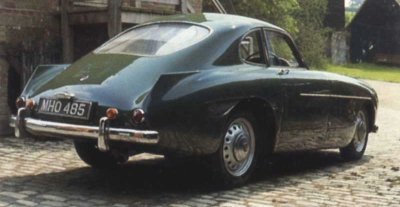 The lighter, short-wheelbase Bristol 404 was the most sporting Bristol yet.

Bristol had been building cars for six years by 1953, so its reputation was well and truly established. About all its cars lacked was outright performance, and a new model launched that year, the Bristol 404, would take care of that.

Designated 404, Bristol's latest was soon nicknamed the "Businessman's Express," for it was a compact two-seat fastback coupe with a top speed of more than 110 mph. Trouble was, only rich executives could afford it, which helped keep sales very low even for a Bristol. Another problem was Jaguar's XK120/140 coupes (see entries), which were faster yet cost half as much.

The Bristol 404 rode a short-wheelbase version of the familiar Bristol chassis (96 inches versus 114). The BMW-inspired six was normally supplied in 105-horsepower tune, slightly higher than in the 403, and there was a new 125-bhp option to make this the most potent Bristol yet. Brakes were also improved, with new Alfin drums and, on early examples, dual hydraulic circuits.

Styling was both smoother and more modern than the 403's, with tiny tailfins that were obviously flash rather than function. In profile, the simple grille resembled the leading-edge air intakes of Bristol's unsuccessful Brabazon airliner.

The Bristol 404 was the first outright performance car for this automaker.

The Bristol-built body was a clever mixture of steel and light-alloy panels over a wood frame, and introduced a packaging feature that would become a Bristol hallmark: a housing in the left front fender for the spare tire. That was matched on the right by a hatch concealing the battery and most electrical components, mounted on shelves no less.

Few got to drive the Bristol 404, but those who did loved its balance, character, and thoroughbred manners. Still, a two-seat Bristol proved just about impossible to sell.

Not to worry, though. A year after the Bristol 404 arrived, Bristol introduced its first-ever four-door sedan, the 405, basically the standard-wheelbase 403 chassis with the 105-bhp Bristol 404 engine. The four-door also shared frontal styling with the two-seater, but its generously proportioned body was a notchback style with rounded lines that made the 405 look more aerodynamically efficient than the 403 it replaced.

It was definitely roomier inside, and airier too, thanks to a modest increase in glass area. Body construction again mixed steel and aluminum panels over a wood framework. Aside from a few more horsepower, the only mechanical difference from the 403 was standard electrically actuated Laycock de Normanville overdrive (effective on top gear only).

Though the 405 was a versatile, high-quality executive sedan, it wasn't as fast as most competitors. No cars were ever released for press appraisal, but a 105-mph top speed seems reasonable -- and not all that impressive. Still, Bristol patrons thought this a dandy successor to the 403, and the 405 sold well by the standards of this tiny company.

While the Bristol 404 lasted through just 40 units built over three years, the 405 saw 294 units in four years. A promised Bristol 404 convertible never materialized, but Abbotts of Farnham produced about 46 open 405s with two-door coachwork.