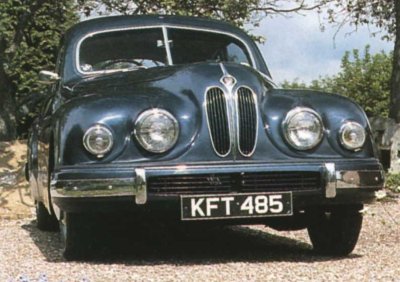 The Bristol 401 was designed to be a serviceable, luxurious vehicle, though it proved quite capable in rallies, as well.

The Bristol 401 and 402 were an attempt to salvage profits as business fell off rapidly after World War II as military contracts ran out. It happened almost by chance. Somehow the firm managed to acquire the services of long-time BMW engineer Dr. Fritz Fiedler, as well as blueprints for and several examples of late-Thirties B­MW cars. A key figure in these acquisitions was H.J. Aldington, whose Frazer-Nash concern had been BMW's UK distributor before the war and would build postwar sports cars using Bristol's "purloined" engine and transmission designs.

Bristol's first automobile emerged at the 1947 Geneva Salon as the Type 400. It was pretty dull stuff, too heavy for its available power and stylistically dated. But it was built with precision and the best materials money could buy -- and was priced accordingly, of course. But Bristol wasn't planning to outproduce General Motors -- or even Rolls-Royce. Just a few cars built patiently for a discerning monied elite would do fine, thank you.

The 400 set a pattern for future Bristols in other ways. Its chassis, for example, has continued without significant change for some 40 years now. A sturdy, advanced box-section structure based on the prewar BMW 326 design, it employed steel floor members for extra torsional rigidity and spanned a 114-inch wheelbase.

Under the hood was an evolution of the legendary 2.0-liter inline six from BMW's prewar 328 sports car, with the same complicated "cross-pushrod" valvegear, hemispherical combustion chambers, and downdraft intake ports. It was a tall but efficient powerplant, initially rated at 80 horsepower.

Topping all this was a fulsome "almost four-seat" coupe body clearly patterned on that of the prewar 327 Autenreith coupe. The similarities even extended to the grille, a slim, BMW-like "twin-kidney" affair.

After 700 examples through late 1949, the 400 gave way to the logically designated Bristol 401. Aside from a nominal 5 extra horsepower, its main distinction was more streamlined styling "such as might be expected from an aircraft builder intent on showing his skill," as a Bristol historian put it.

However, the new body design came not from Bristol but Carrozzeria Touring of Italy, and thus had the coachmaker's patented Superleggera construction (aluminum body panels attached to a strong, multi-tube framework). Though still a two-door 2 + 2, the 401 looked more aerodynamic than the 400, and undoubtedly was. Its top speed was somewhat higher, now 95 mph, while mildly modified examples could do 100 mph.

It was with this smooth-lined machine that Bristol began to make its mark among GT cars -- and in motorsport. The Bristol 401 competed in rallies, but was still hampered by comparatively high weight despite its new "superlight" body.

Accompanying the Bristol 401 was a derivative convertible designated Bristol 402. Pinin Farina had a hand in modifying the coupe's lines, but the result was less than satisfying, especially the longer, more rounded rump. Bristol itself handled this model's body building.

Chassis and running gear came straight from the 401. Though a little garish by Bristol standards, the Bristol 402 was nicely detailed. Its soft top folded completely away, and removable cant rails were provided for snug wind and weather sealing between the top and the upper edges of the side windows.

The Bristol 401/402 saw lower production than the 400, just 650 coupes and a mere 24 convertibles. Not that this bothered Bristol. In fact, the firm had something even better to show as early as 1953. Well, at least it was faster.