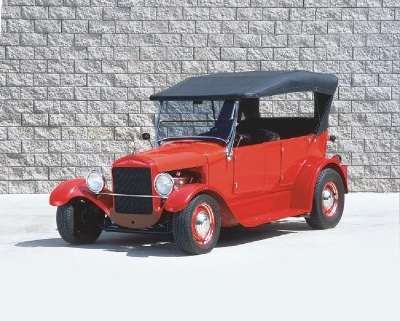 The Booth '27 T found its origins in 1966 when Dan Woods, called fellow Early Times Car Club member Bill Booth and told him about a disassembled '27 T touring for sale. Bill greatly admired friend John Monteiro's T touring and wanted one of his own, so he raced over to the owner's house and bought it on the spot.

His quick response landed him the car just before another Early Times member showed up to buy it. "We must have had seven or eight touring cars in the club. They were all the rage," Bill recalled.

As a founding Early Times member and devoted hot rodder, Bill used the car to take part in many of the formative hot rod social activities that have become so important to the hobby. Bill even used the hot rod for several trips around the country.

The trip that was the most fun for Bill and his wife Elaine was the 1970 pilgrimage to Peoria, Illinois, for the first Street Rod Nationals with fellow Early Times members.

Other trips, including a jaunt to Boston to visit associate L.A. Roadsters member Ted Wingate, a cruise to New York City and Wash­ing­ton, D.C., and a repeat trip to the Street Rod Nationals in Memphis -- all from Long Beach, California -- racked up an incredible number of miles of open-air touring.

Like many rodders, Bill changed his car frequently. When he first built it, he assembled all the parts needed, built and installed a Chevy 283-cid V-8, modified the chassis, routed the wiring, and ­painted the car himself.

Along the way, the hot rod underwent several repaints, changing from its original burgundy with black fenders to burnt orange with brown fenders to the brilliant red it is today.

One of the best changes Bill made was installing a Jaguar independent rear end in the early 1970s. The new rear suspension made all the difference in the way the lightweight tub rode. Bill explained: "We would be boogying down the highway and go over a dip, and the rear passengers would all but fly out of the car. The Jag rear fixed all that."

The Jaguar independent rear end greatly improved the ride in the Booth '27 T.

Bill installed a Chevy 350 and a Turbo 400 transmission in the mid 1970s to replace the tired 283. Later, he added steelie wheels with caps and rings and modern radial tires.

Bill was in the process of freshening the paint when these photos were taken in 2002, as evidenced by the primered front splash pan in the top photo. With more than 200,000 miles on it, the touring was still going strong when Bill passed away in 2003.

His wife Elaine briefly considered selling the Booth '27 T, but realized that it had too much sentimental value. She plans to keep it and eventually pass it on to their son Todd.