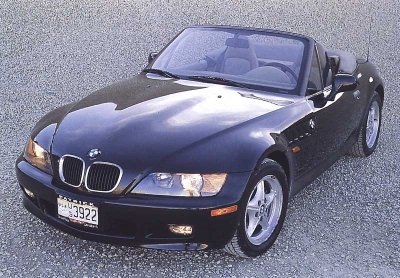 With the BMW Z3's naturally aspirated four-cylinder engine, manual-gearbox, and do-it-yourself folding top, it was more conventional than the Mercedes-Benz SLK or Porsche Boxster.

The BMW Z3 did not get the warmest of receptions. Power-hungry types said they'd wait for the six-cylinder version. Fashion hounds criticized the front-end styling. No one warmed to the meek exhaust note. Being a BMW, there's a certain maturity about it, and for those who can forgive the modest engine output and stir its shifter, the rewards are many.

On sale in spring 1996, the BMW Z3 beat Mercedes-Benz's SLK and Porsche's Boxster to market in the European roadster renaissance of the mid-1990s. Juiced by an overhyped cameo in the James Bond flick GoldenEye, demand for the BMW Z3 deluged BMW's just-opened South Carolina factory, which was the car's sole worldwide source.

Part of the allure was the BMW Z3's overtly sporty long-hood, short-deck proportions, though some observers found the globular nose a mismatch for the rest of the body. BMW said the decorative front-fender vents "can be interpreted as a small stylistic tribute to the BMW 507 roadster."

Comparisons with the Mazda Miata were natural and showed the BMW to be seven inches longer in wheelbase, three inches longer overall, and nearly 400 lbs heavier. Both cars have a manual soft top with a plastic rear window, though the BMW Z3 easily has more passenger and cargo room.

To control costs, BMW reused the semitrailing-arm rear suspension from an earlier-generation 3-Series sedan, a design BMW Z3 press materials defend as "appealing uncomplicated." It works, though, and except for occasionally jitterbugging its tail in fast, bumpy turns, the BMW Z3 is composed, balanced, and agile. A bonus is a supple ride and nearly flex-free construction deserving of the BMW rondel.

A far-more-powerful six-cylinder version waited in the wings, but the four-cylinder BMW Z3 offered modern drivers a taste of the days when going fast in a sports car required some skill.

Less worthy, at least in specification, is the 1.9-liter four-cylinder engine. It has little low-end punch and never seems really to stir the soul. But its smoothness invites running near the 6400-rpm redline. There, the car feels alert and modem drivers can experience the sporting flavor of a bygone era.

For while the four-cylinder BMW Z3 is thoroughly modern in its dual air bags, anti-lock brakes, and optional traction control, it's a throwback to the days when high speeds didn't come so easily, when one could exercise a sports car to its full potential without risking limb or license. That's rewarding by any measure.

To learn more about BMW and other sports cars, see: