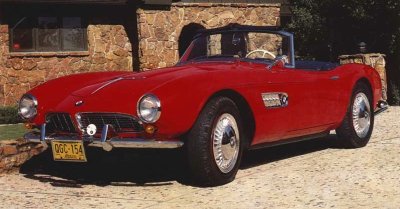 The curvy BMW 507 was a remarkable achievement for a BMW that was struggling to survive in the mid-1950s.

The BMW 507 was the first sports car from BMW that could compete with the Jaguars and Ferraris. Born in 1916 as an aircraft-engine manufacturer, Bavarian Motor Works had branched out into motorcycles by the late Twenties and was looking to expand into the auto business. It got the chance when the Dixi company in Eisenach proposed that BMW take it over, thus giving the Bavarian firm a license-built version of the British Austin Seven.

BMW soon developed cars of its own that moved far beyond that humble little rattletrap, building a reputation for superb engineering in the process. This naturally embraced sporting models, of which the most famous and successful were the six-cylinder Type 328 and 327 of the immediate prewar years, and later, the BMW 507.

But then came World War II, and BMW emerged as divided as defeated Germany itself. Some of its prewar facilities were irrevocably lost behind the Iron Curtain in the new state of East Germany, while those that remained in free West Germany had been devastated by Allied bombing. Rebuilding from this rubble was slow and painful, and it wasn't until 1951 that BMW was able to return to car production, though it did so with a new postwar design.

Designated 501, this was a big, bulbous sedan that was altogether too costly for the German market at the time, though BMW was still far too small to field a cheaper, high-volume product, and complex construction more or less dictated a lofty price. The 501 chassis, for example, was a massive box-section affair with tubular cross-members and torsion-bar independent-front/live-axle-rear suspension.

Power came from an updated version of the prewar six with its complicated valvetrain. Nevertheless, the "Baroque Angel," as it came to be called, sold well enough to give BMW at least a toehold in the car business, and the firm followed up in 1954 with a new 2.6-liter pushrod V-8 for a derivative model, the 502.

What happened next was something of a surprise for such a struggling outfit: a return to sports cars. At the urging of influential U.S. foreign-car baron Max Hoffman, BMW recruited German-American industrial designer Count Albrecht Goertz to come up with a pair of sporty models using 502 chassis and running gear.

Goertz worked quickly, and the results appeared in September 1955 as the 503 and 507. The former, offered in cabriolet and closed coupe styles, was a smooth if sedate 2+2 tourer rather than an out-and-out sports car. That role was left to the dashing BMW 507.

Conceived as an open two-seater, the BMW 507 shared the big sedans' steering, suspension and track dimensions but rode a wheelbase shortened by no fewer than 16 inches. It also shared the 502 V-8, albeit tuned to 150 net horsepower, teamed with 4-speed gearbox. Early 500-series BMWs employed a remote-mounted transmission, but the BMW 507's gearbox was always in unit. Veteran BMW engineer Fritz Fiedler designed the chassis along 501/502 lines, though the structure was all-new (and shared with the 503).

The 503 was neat and clean, but it positively paled next to the BMW 507. Here was styling as elegant and exciting as anything from Ferrari, Jaguar, or Mercedes-Benz -- and completely unmistakable, a glamorous new image-leader for BMW. Compared with the Baroque Angel, it looked like something from the next century.

As with the American Corvette and Thunderbird, an optional lift-off steel hardtop was offered to supplement the standard folding roof, and looked great. In typical Teutonic fashion, the BMW 507 was fully equipped and solidly detailed but heavier than its lean looks implied. In fact, it and the 503 weighed little less than the big sedans.

Those who drove the BMW 507 were exhilarated by its straightline performance but disappointed in the rather ponderous handling and the all-drum brakes (improved by substituting front discs on the last few examples). Top speed was 120+ mph -- good going for the available power (and testimony, perhaps, to the aerodynamic efficiency of Goertz's styling) -- but with more than 2900 pounds at the curb, the BMW 507 was not as nimble as it could have been.

The BMW 507 was never intended to make real money -- and at an astronomical $9000 in the U.S., it didn't. As a result, production ended after less than three years and a mere 253 units. But as the most memorable BMW of these years, the BMW 507 was important to the firm's fortunes because it helped revive BMW's prewar reputation for fast, durable, uniquely styled road cars with impeccable engineering credentials.

In fact, it's fair to say that the BMW 507 is the granddaddy of today's "Ultimate Driving Machines," even if it didn't sire them directly. That it's also recognized as a classic in its own right is only fair too, for it was and always will be.

To learn more about BMW and other sports cars, see: