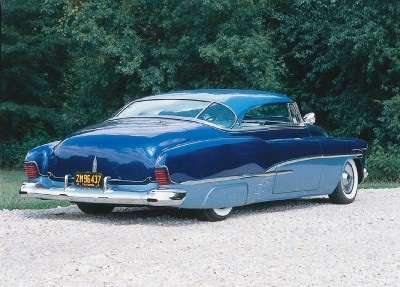 Long and low, the Blue Danube required rollers under the rear end to prevent the bumper from scraping the ground. See more pictures of custom cars.

A creator of the Blue Danube, Lyle Lake arrived from Florida in the mid 1950s and became shop foreman at Barris Kustom Autos in Lynwood, California. By that time, the gang at the shop had pretty defined roles. Sam Barris was the artist, designing the look for clients' cars and often executing it. George Barris was the front man, getting the shop's name out there.

As part of his efforts to tout the Barris name, George worked for Petersen's Trend Books, snapping pictures and writing articles on customizing techniques.

Since Lyle worked at the Barris shop, George thought it would be a good idea to use the Buick the shop was building as Lyle's personal car in an article on the cost of customizing. So, camera and invoices in hand, George and Lyle documented everything along the way.

Lyle's 1951 Buick Riviera received extensive bodywork. Lyle and the Barris crew chopped the top three inches in front and six inches in the rear ($700), laying the rear window down to match the roof angle. This created a low, lean look that was complemented by several bodyside modifications.

The crew shaved the doors and added pushbuttons ($50), installed handmade skirts ($20) and functional rear brake scoops ($55 each), and reworked the side trim using stock trim up front with straight trim running from the rear bumper to the middle of each door ($20 each).

The trim choice was a curious one because many non-Buick customs of the day utilized Buick side trim for its unique, swoopy shape. Nonetheless, it worked, especially with the paint.

The face was also quite unique. Instead of a complete bumper, Lyle chose a rolled front pan flanked by two bumperettes made from 1951 Chevy parts welded to Cadillac bullets ($80). The shop cut the grille from lengths of tapered tubing ($115) and rounded the hood corners ($10 each) to match the grille opening. The nose was dechromed ($25) and a California Custom Accessories headlight shade kit ($50) was frenched in, visually extending the fenders.

Some interesting touches were incorporated into the rear as well. Lyle added frenched taillights made by splicing two 1954 Merc lenses together and installing them upside down ($65 each). The bumper was taken from a 1953 Oldsmobile ($80) and the exhaust was routed through it ($70). Finally, thanks to the $190 lowering job, rollers were needed under the rear end to ­prevent the bumper from scraping on the ground ($20).

The Blue Danube garnered a lot of attention, appearing on the cover of Trend Book 143 - Restyle Your Car. It also showed up in the March 1958 issue of Custom Cars, and in an episode of the television show The Twilight Zone.

Unable to find the original, noted custom collector Jack Walker contacted Lyle Lake and learned it had been crushed. So Jack commissioned Kenny Baker and Dick Huckins to build the clone shown here in 1998. The original may be gone, but the Barris article on the car provides us a glimpse today of the price of admission for the best in 1950s customizing.